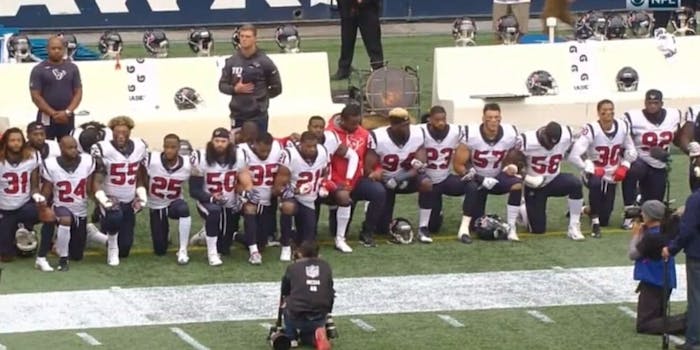 After NFL owner offends players, most of his team took a knee during anthem to protest

They're not backing down.

Days after it was revealed that Houston Texans owner Bob McNair said NFL owners can’t “have the inmates running the prison,” his players showed him exactly how they feel about being referenced as criminals before their game Sunday.

Even though McNair sent out two statements of apology, some of his players reportedly had to be talked out of boycotting practice on Friday. Instead, the vast majority of the team took a knee during the anthem before its game vs. the Seattle Seahawks.

Texans players are on the sideline getting ready for the national anthem. I expect some to kneel. That would be the first time.

“Some” was an understatement.

Counted maybe 10 Texans who stood for the anthem. Entire sideline was mostly kneeling. Several Seahawks sat as well, same as usual this year

Here is a another look. All of the #Texans kneelers together. Some on the bench sitting, some standing. pic.twitter.com/rH1jFZ9A0b

majority of #Texans players kneel for 1st time during anthem – some stood – after comments made by owner Bob McNair. pic.twitter.com/7O0zJZRW97

According to the Houston Chronicle, this is the first time any Texans players has ever kneeled before the national anthem (though one player raised a fist once last season). The fact they protested this week in the wake of McNair’s comments is likely not a coincidence.