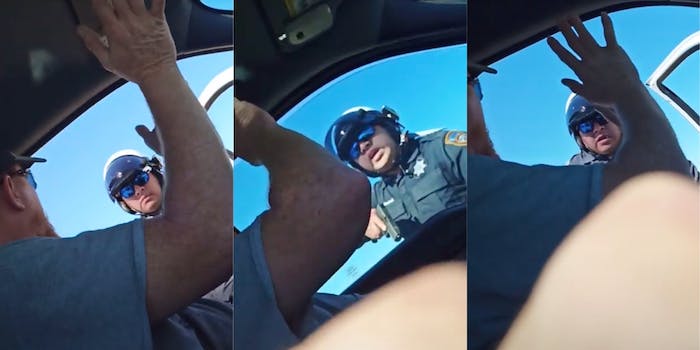 'If I threatened to kill somebody, I would go to jail.'

A YouTube video shows a Harris County police officer drawing down on a driver and threatening to “fucking kill” him for “throwing his vehicle” toward his motorcycle.

According to an ABC 13 report, Harris County (Houston area) officials have begun an investigation following a video that shows a deputy drawing his gun on a driver and his work partner on the South Loop Monday afternoon.

Per the report, at around 1:40pm CT, George Dickerson claims he merged onto the South Loop from US-59 but found himself trapped in a funeral procession.

Dickerson told the station that cars in the train took up the inside lane, and two motorcycle officers were in the lane beside them. He joined Harris County deputies’ lane to pass the vehicle in front of him, he says.

“I really just wanted to get in front of that car, so I did that,” Dickerson recollected. “The cop in the front slowed down, so I couldn’t go around. Then, the other one came around and I was like ‘What? What’s going on?’ He was like ‘Stop.'”

Dickerson explained to ABC 13 that one of the officers slammed on the brakes. He did the same, as did the other motorcycle deputy behind them both.

“He went around the truck, stopped and parked in front of us,” Dickerson said. “I’m in the left lane in the middle of the freeway and he gets off his bike with his gun drawn and comes at me and as soon as I see his gun drawn I put my hands in the air and said, ‘I don’t want any trouble.'”

Dickerson’s co-worker captured what happened next on video, including the Harris County deputy with his gun drawn on Dickerson, who has his hands up.

The unnamed deputy is heard declaring, “I’ll fucking kill you.”

“He’s trained to handle himself, as well as people on the street,” Dickerson told ABC 13. “You would think his training would help him to not have that road rage. That’s not something you do every day, is threatening to kill somebody. If I threatened to kill somebody, I would go to jail. If I held a gun to whomever and said ‘I’m going to kill you,’ that’s a terroristic threat.”

However, it is clear the deputy believes Dickerson drove recklessly and put his life in danger. In the video, the Harris County deputy says to the driver: “Throw your fucking car at me again, and I’ll fucking kill you.”

There is a brief back and forth about the angry deputy’s allegation before the video ends.

The Harris County Sheriff’s Office tweeted a statement: “We are aware of a video posted to social media that appears to show a roadside encounter between a deputy and a motorist. An investigation into the incident will be conducted by our Internal Affairs Division.”