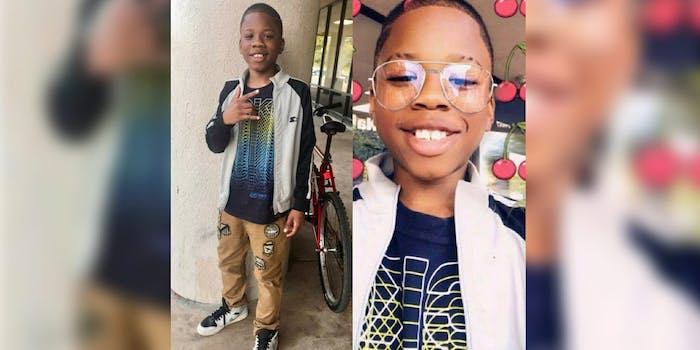 Black teen reportedly abducted, assaulted after getting off bus—and the internet wants answers

The boy said his kidnappers told him he was targeted because he's Black.

The internet is attempting to signal boost the story of a Black teenage boy who was kidnapped from his bus stop in Houston earlier this week. Though he managed to escape, the boy says the white suspects threatened to kill him.

According to Houston’s ABC 13, 13-year-old Zavion Parker told authorities that shortly after getting off the school bus on Monday, five teenage boys around 17-18 years old approached him on the street and forced him into a four-door red truck with flames on the sides.

He said the teenagers, along with one adult male driver, took him to a vacant house or cabin and assaulted him, taking his jacket, shoes, phone, and keys. Parker described the adult as white, heavy built with straight orange hair, and a tattoo on his arm that said, “I hate Black people.”

Erica Simon, an ABC 13 reporter, tweeted that Parker said the property was full of guns and torture items. When he asked why he was abducted, he said he was told it was because he was Black. Parker said that when the suspects went into another room to load a gun, he ran out of the building.

Zavion said he was taken to a vacant property full of guns/torture items that looked like a cabin from the outside. When asked why he was abducted, he says the suspects replied “because you’re Black.” He managed to run away; a driver found him, called police.

Camecia Carmouche, a witness, saw Parker running along the street with torn clothes and no shoes. She flagged him down and called police. According to Carmouche, Parker told her that he saw other Black people in the house who were “not moving.”

This is Camecia Carmouche, the woman who saw Zavion Parker running down the street; stopped to help him. pic.twitter.com/wFNpLheNsx

His mother, Michelle Lee, called police when Parker didn’t return home from school and received text messages from Parker’s phone saying the suspects were going to kill him. Lee said she believes her son was targeted because of the suspected man’s racist tattoo.

Simon reported that on Wednesday, Parker, his mother, and Carmouche led Houston Police Department officers to the property that Parker described, where police found a wooden chair, shell casings, and weapons.

Across social media, supporters of  Parker questioned why he hadn’t garnered more attention over the past week, and encouraged others to keep tweeting about him in order to boost his story. So far, national outlet Teen Vogue and international outlet Daily Mail have reported on Parker’s story.

A Black 6th grader named Zavion Parker was kidnapped & torture by a group of white supremacists, and he miraculously escaped with his life. And the msm and law enforcement has been silent about this. Black society has to be on full alert https://t.co/hlYiX82odM

Why is #ZavionParker not trending? A black 13 year old boy was kidnapped by a group of white supremacists. He was taken to an abandoned building where the group had several torture weapons and guns. THIS HAPPENED IN 2018 THIS SHOULD NOT BE HAPPENING IN 2018!!

this needs to be national news. this is terrorism, it is sub-human horror. #ZavionParker https://t.co/GlrLWk0fHX

Why is #ZavionParker not in the news right now? This Black boy was abducted by 5 white men and was about to be murdered? Don’t let this story get swept away.

As of Thursday, the Houston Police Department stated that the case is still an active investigation. The Houston Independent School District said it sent out a robocall notice to parents at the middle school Parker attends and will have extra patrols around campus as a result of Parker’s abduction. Parker’s community is holding a “Justice For Zavion” rally on Saturday in support for the boy.