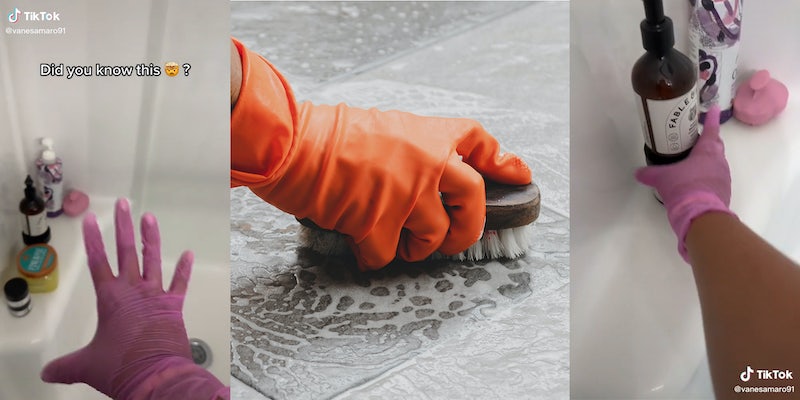 ‘How do people not know this????’: Former housekeeper of over 8 years shares hack for cleaning your shower

'I can't believe this is a video.'

Nowadays, showers are filled with a variety of accouterments. Loofahs, shampoos, conditioners, leftover travel bottles you promised yourself you’d use but never got around to actually emptying—all of the above can lead to a filled and, understandably, difficult-to-clean shower.

However, a popular cleaning TikToker shared their tip for shower cleaning, and it involves a plastic waste bin.

In a video with 1.2 million views, TikTok’s self-proclaimed “Queen of Cleaning” Vanesa shares a valuable tip. Rather than simply dumping the bottles on the floor or moving them to the sink, Vanesa advises her 5.5 million followers pick up a small, webbed plastic basket from the Dollar Store (or Target, “if you’re bougie”).

“Now take everything and just put it inside, like that,” she demonstrates. “So simple and easy.”

“Now you take the basket out, and now, you can clean!” Vanesa, who says she was a housekeeper for more than eight years, concludes.

At first, many commenters were surprised that other users hadn’t already figured this out on their own.

“Once again how do people not know this????” one user asked.

“I can’t believe this is a video,” another added.

“Am I the only one who had already been doing this?” a third questioned.

However, many commenters said they never considered the tip, thanking Vanesa for the advice while admitting to their previous shampoo stash spots.

“So simple but I’ve never thought about that!” a user wrote.

“It’s definitely just going on the floor until I’m done,” a second shared.

Other users offered tips of their own.

“Extend that basket (even a tray would work) to all areas of the house to not make a million trips to clean/organize one area,” a commenter advised. “Very good tip!”

“I do this but I also spray everything (that isn’t open or exposed) with bleach spray and rinse everything in the basket cause they get grungy too,” an additional TikToker contributed.

The Daily Dot reached out to Vanesa via email.