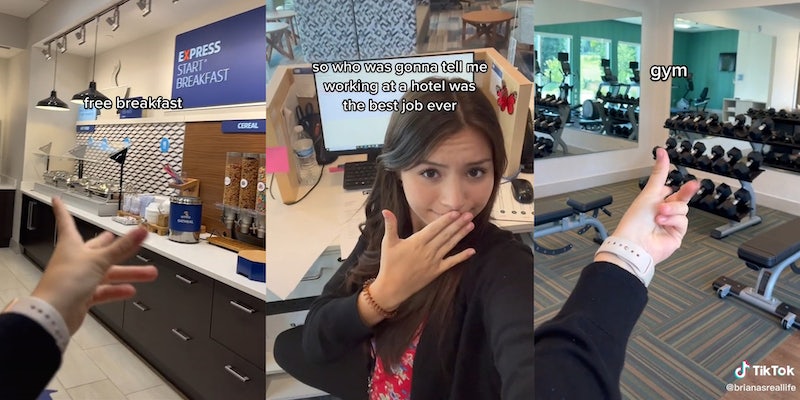 ‘3 years as a front desk clerk and it traumatized me’: Hotel worker says she loves working the lobby, sparking debate

'Until the Karen's come and they say there's no hot water.'

A hotel worker has recently gone viral—and sparked considerable debate—after posting a video showing how much she loves working at the front desk of her hotel.

In a video with over 4.7 million views, user Briana (@brianasreallife) shows the many perks of her hotel job, including access to breakfast and a gym, and a generally relaxed working environment given that the lobby is empty “90% [of] the time,” according to her video.

“So who was gonna tell me working at a hotel is the best job ever,” Briana asks in the text overlaying the video.

While Briana seems to have a positive relationship with her job, commenters warned that she might be speaking too soon. The TikToker revealed in comments that she has only been working in the role for two weeks.

“It’s fun but it will get old after a few years,” a TikToker shared.

“Until convention season in any major city,” a second wrote.

“Until the Karen’s come and they say there’s no hot water, housekeeping stole something, late checkout, etc,” a further user explained.

In a follow-up, Briana answered some of the questions posed in the comments section of her original TikTok.

In summary, she says the negatives of the job include things like low wages and dealing with the aforementioned “Karens.” To be specific, she says her job at the hotel pays $11 per hour, which she says is not bad considering that the average starting rate in the area is $12.

However, Briana says that there are numerous other benefits that her job offers, including understanding management and flexibility when it comes to scheduling. She also says the “Karens” do not bother her as she’s worked other jobs in the past where she’s had to deal with difficult people.

In conclusion, she says she’s not seeking hotel work as a career, she is simply showing what she perceives to be the benefits of this job.

While Briana seems okay with her salary, users on TikTok were aghast about her wage.

“Currently I work at a grocery store at 16 and my starting pay is 14,” another added.

“Girl starting at my holiday inn is 15,” a third claimed.

Still, many others said that if Briana is happy, they’re in no place to judge.

As one user wrote, “aint mad at ya, got nothin but love for ya, do ya thing.”

The Daily Dot has reached out to Briana via Instagram DM.