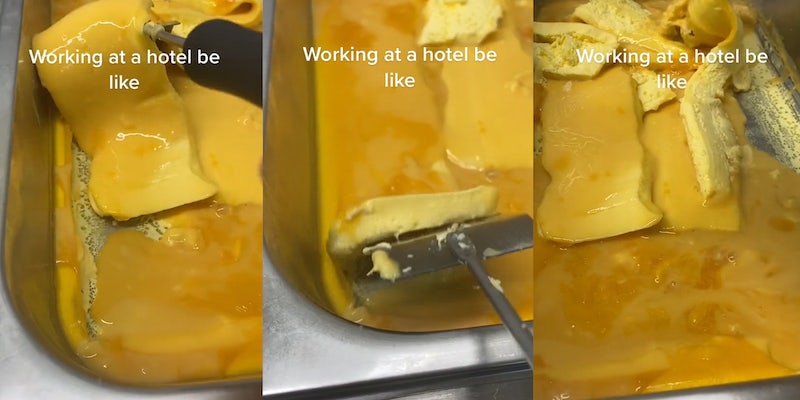 'I never liked hotel breakfast in the first place.'

TikToker Megan Rose (@_eg_girl) posted a 17-second video that shows her cooking eggs in a food warmer at a hotel. As of Tuesday, the video went viral with about 2.6 million views.

Any one want some eggs? 🥰

The eggs were the subject of a heated debate among viewers. The tray held several half-cooked eggs that Rose was half-heartedly stirring. It seems that they’d been sitting in the tray so long that they started to congeal, with half of the beaten eggs still runny and the other half with an almost custard-like appearance.

“Working at a hotel be like,” the video’s on-screen text reads.

It’s unclear if Rose made the video in jest, but several viewers cracked sad jokes at the even sadder-looking eggs.

“no thank you i’m full,” one viewer commented.

“Thats custard at that point LMAO,” a second viewer commented.

Some viewers defended Rose and her eggs, saying she did nothing wrong and her eggs were just being eggs.

“That’s literally what’s eggs do when you cook them tho,” one user said.

“I mean yeah that’s usually what scrambled eggs looks like until you break it apart lol,” another user wrote.

“Ngl the hotel eggs hit tho,” one comment read.

One viewer commented, “Hotel and hospital eggs hit on another level no lie.”

“And what. I will devour a whole entire plate of those they are so good,” another viewer wrote.

In an update video, Rose posts a highly requested tutorial on how the eggs are made, showing that they come in a box. She pours the boxed eggs into a container before pouring the raw eggs into the food warmers. She explains that she’s not a cook and that the hotel is not large (another video confirms she works somewhere in the Pacific Northwest) so she helps out where she can.

Rose leaves the eggs to “cook” in the pans for more than two hours, first on medium heat and then on high heat. Several commenters were alarmed at the method, claiming it was a health code violation to cook food in food warmers.

“Soooo I don’t know if anyone has mentioned this, but it’s a health code violation to cook food in a steam table. They’re made for holding food at temp,” one user wrote.

“No this is for warming. Not cooking. That’s a huge health code violation. They are in the tempature danger zone for WAY too long,” another echoed.

“No wonder why it takes so long … because you’re cooking raw eggs in something that is only supposed to keep already COOKED food warm,” another wrote.

Rose did not immediately respond to these comments but did upload a video of the results of her cooking.

According to the U.S. Food and Drug Administration, raw shell eggs broken for immediate preparation should be cooked at a temperature of 63°C (145°F) or above for 15 seconds. The FDA also has a multitude of resources on how to properly cook eggs to prevent the food-borne illness Salmonella.