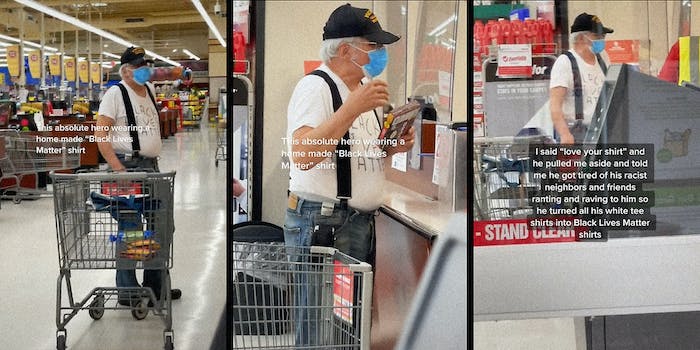 'The excuse 'they grew up in a different time' is BS.'

Posted by @idiot_chickens, the video, which has over 480,000 views, shows the older gentleman in a Connecticut grocery store dressed in a white t-shirt with the words “Black Lives Matter” written in marker, with a Vietnam War hat and suspenders. He’s also masked up.

The poster says she told the man “love your shirt” and she says the man “pulled [her] aside and told [her] he got tired of his racist neighbors and friends ranting and raving to him, so he turned all his white tee shirts into Black Lives Matter shirts.”

People wanted to purchase BLM shirts for the Vietnam War veteran, but the OP said he “seemed to be more interested in wearing a specific brand of white tees.” While some folks are hesitant to call the simple act “heroic,” viewing it as the bare minimum, numerous others are demanding to “protect this man at all costs.”

The conscientious man stands out amongst other white baby boomers in his support for the Black Lives Movement. A few commenters took this as an example of how age does not determine beliefs.

“I absolutely love this!!!” one person wrote. “The excuse ‘they grew up in a different time’ is BS.”