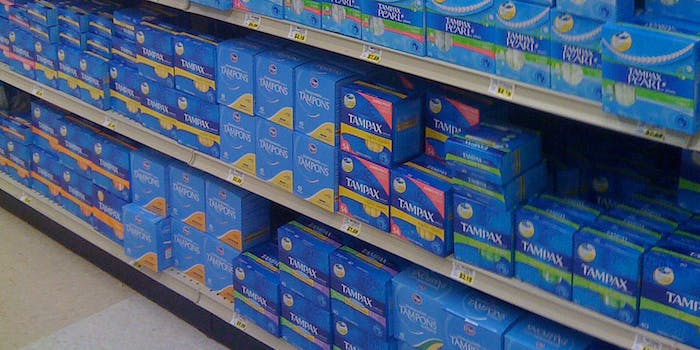 There’s a campaign to fund tampons for homeless women—but is it enough?

A campaign called #thehomelessperiod is trending online. But a lack of tampons isn't the biggest struggle homeless women face.

Activists across the United States and Europe are seeking equal menstruation rights for homeless and low-income women. After a flurry of press coverage this January, the topic of free menstrual products for homeless women is once again trending—this time because of a new UK-based campaign to try and pressure parliament to budget for the supplies to be distributed at homeless shelters.

The campaign, #thehomelessperiod, is trending on Twitter, and the group behind it launched a Change.org petition that has over 8,000 signatures as of today.

My period starts today. I have a bathroom + sanitary protection = dignity. Homeless sisters don't. They should. #TheHomelessPeriod

Sara Bakhaty, one of the creators of #thehomelessperiod project, told the Daily Dot that the group actually needs 100,000 signatures to get a petition before Parliament. She says she had no idea that the group would get so many signatures so quickly.

“In the short term, our aim is to raise awareness and we’ve been really overwhelmed with the response so far,” Bakhaty said, pointing out that she’s looking to partner with a sanitary product manufacturer to help distribute the products.

Here in the United States, there are a number of organizations that focus on getting free pads, tampons, and even bras to homeless women. In Florida, the Period Project collects donations of sanitary napkins and tampons for the local chapter of Coalition for the Homeless. New Jersey’s Distributing Dignity launched in 2009 after homeless center volunteers discovered that women didn’t have access to bras or menstrual products.

There are also a handful of UK organizations focused on raising money for homeless women’s menstrual products. Tampon Tuesday is a London-based series of events akin to Tupperware parties, where women bring boxes of tampons to donate to food banks.

These campaigns to raise awareness of the lack of sanitary products available to homeless and low-income women are fulfilling a concrete need. In the United States, women aren’t allowed to use food stamps to buy tampons. And according to Jerry Jones, the executive director of the National Coalition for the Homeless, shelters and other service providers usually don’t have enough on hand to give residents.

“There’s definitely a legitimate gap in certain types of donations,” Jones told the Daily Dot, “Things like socks, underwear, sanitary napkins, and other things for whatever reason don’t come to mind when folks make donations. In many cases, agencies do have to raise money and spend their own dollars in order to get them.”

But while raising money and awareness for feminine hygiene products is definitely needed, the media attention focused on the campaigns could be diverting attention from even more important struggles facing homeless women that aren’t quite as attention-grabbing.

The media attention focused on the campaigns could be diverting attention from even more important struggles facing homeless women.

According to 2013 statistics from the Department of Housing and Urban Development (HUD), the rate of women in homeless shelters is on the rise. Women made up 37 percent of shelter residents across the US in 2013, and one-fifth of all homeless shelter residents were children, who are often accompanied by their mothers. But in some cities, women make up the majority of the homeless. In New York City, for instance, 80 percent of homeless people in shelters are women and children.

It’s clear that the most pressing issue for homeless women is a lack of housing. But recent studies have shown that there is another major issue afflicting homeless women: trauma.

In a 2014 New York state study, the Wilson Foundation surveyed homeless mothers over a 30-month period. The foundation discovered that a staggering 93 percent of homeless women had suffered a severely traumatic event such as rape, sexual abuse, domestic violence, or another kind of violent physical attack. More than 80 percent of those women had survived multiple traumatic events.

“It’s probably the most unaddressed reality of homeless women,” said Jones. “They’ve experienced sexual violence or domestic abuse, and the service system does often ignore that and focuses instead on food and shelter. So we have a population that isn’t getting the care they need for that trauma.”

“We have a population that isn’t getting the care they need for that trauma.”

Jones said some service providers are trying to adopt more of a “trauma-informed approach” to working with homeless women. That could mean making safety and trust the biggest priority for service providers and shelter employees, and to place a high value on avoiding re-traumatizing the population.

As far as making sure homeless women have the supplies they need to deal with their menstrual cycles, activists are trying to find a solution to a real problem. But it’s a temporary solution that barely scratches the surface of larger causes of homelessness.

“I wouldn’t criticize a campaign for lifting up the issue, but donations of any sort aren’t going to address the underlying crisis,” Jones said.

Bakhaty agreed that there are many complex problems facing homeless women, but said that the lack of access to menstrual products was an issue “all women could relate to.”

Currently, homeless shelters in the UK get government grant money to pay for condoms and other items. But pads and tampons are not in the budget. #Thehomelessperiod is looking to change that.

“This is about a small thing that could make a big difference to a woman’s life while on her period,” said Bakhaty.

Photo via Brad Cerenzia/Flickr (CC BY 2.0)