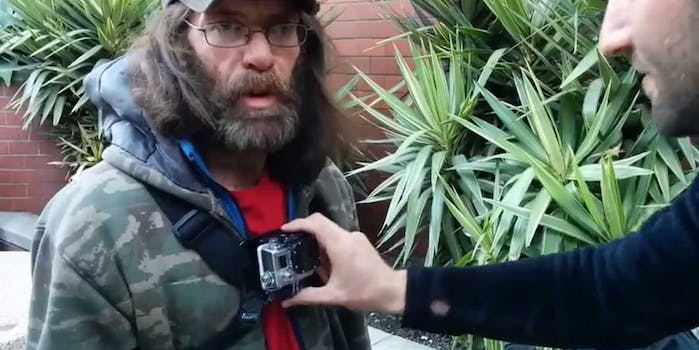 Homeless GoPro: A first-person view of life on the street

Talk about a new perspective.

To confront the issue of homelessness in San Francisco, a new project is creating a new kind of reality TV. And the reality couldn’t be more raw.

The name of the project is Homeless GoPro, and the idea is to build empathy by strapping a GoPro camera to a homeless person’s chest, capture footage of his or her daily life, and uploading edited videos to the project’s website.

The nascent project launched earlier this week, and thus far the team is only working with one homeless person, a 44-year-old father of three named Adam Reichart.

“There’s a shared concept of human dignity we’re trying to build,” Heather Warnken, a legal policy associate at U.C. Berkeley and one of the project’s four founders, told the Daily Dot.

According to his bio on Homeless GoPro’s site, Reichart has lived on the streets for the past 30 years, during which time he has struggled with substance abuse.

“That’s why people have turned a blind eye to homelessness so frequently,” Warnken said. “It is often unrelatable, it is often very painful, it does often involve risk factors like struggles with mental health and challenges with substance abuse.”

Education technology entrepreneur Kevin Adler wrote that he came up with the idea for Homeless GoPro during a trip to the gravesite of his uncle, who was homeless and suffered from schizophrenia. Despite his uncle’s plight, Adler remembered the man as a caring and relatable person.

“He was the most family-oriented member of my extended family,” Adler wrote of his uncle on the project’s website. “He remembered every birthday.”

The technology community has been maligned at times for past efforts to address homelessness. San Francisco has been a particularly contentious location in recent years, as the city’s increasingly wealthy tech community has sometimes butted heads with the sizable homeless population.

Sally Greenspan, who works on housing solutions for the homeless as program director for the New York-based Enterprise Community Partners, said she was “positively impressed” with the sensitivity and respect of Homeless GoPro’s approach. To Greenspan, addressing homelessness on a person-by-person basis and focusing on individuals’ stories connect “to emerging best practices around homelessness.”

“There are obviously themes that Adam is experiencing and things that he’s going to do and see that will be emblematic of the broader issues that all homeless people face,” Greenspan said.

Warnken stressed that the project is still in its very early stages, and she was not yet sure of many of the finer details. While using the footage in a documentary film is one option that’s on the table, the Homeless GoPro team is also looking to engage audiences on a regular basis.

The project aims to eventually tell a “more comprehensive story” by involving new homeless people who volunteer to participate, Warnken said. For now, the group is taking it slowly and focusing on the safety and comfort level of all who participate.

That being said, the Homeless GoPro team does not plan on avoiding difficult issues that are often connected to homelessness, such as mental health and substance abuse.

“Won’t shy away from those,” Warnken said. “We want to find new ways to bravely and compassionately confront them.”