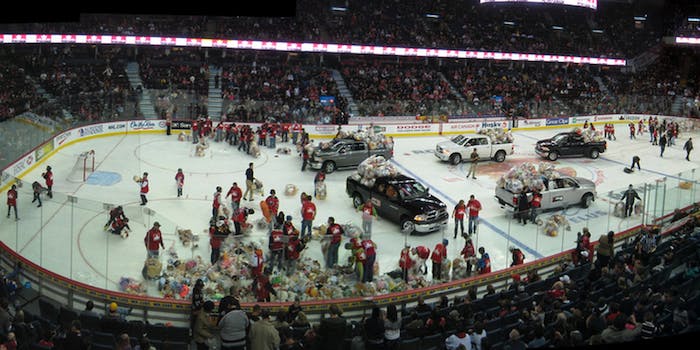 Watch it snow teddy bears at a professional hockey game

Once a year, teddy bears rule the ice rink in the name of charity.

The Calgary Hitmen, a Canadian junior hockey team, held its 19th annual Petro-Canada Teddy Bear Toss Sunday night (along with four other cities). It’s a charitable tradition in which fans, who supply the stuffed animals beforehand, toss everything they’ve got onto the ice whenever the home team scores its first goal.

This year, the honor of the first goal went to a repeat victor: winger Pavel Padakin.

The game was halted for 33 minutes as the Hitmen collected 25,921 bears for local charities—over 4,000 more than last year. At one point, Padakin fell to the ground and did snow angels in the middle of the ice rink as more bears fell down around him.

According to Hitmen General Manager Mike Moore, even after almost two decades of the Teddy Bear Toss, it never gets old.

“Somebody told me it went for 11 minutes before they stopped coming down,” he told the Calgary Sun. “It’s just amazing what this community does.”

And it’s apparent that the hockey players enjoy this just as much—if not more—than the fans.