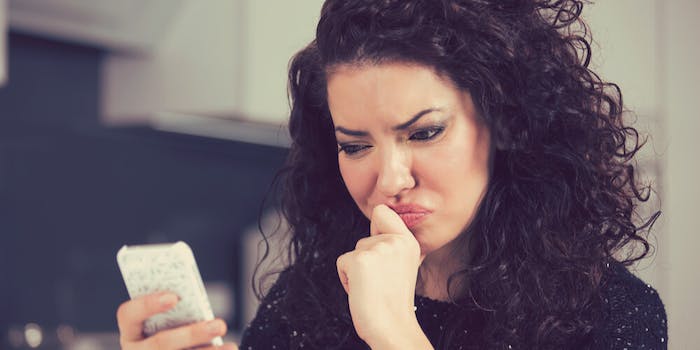 Am I overreacting to a Facebook message from a dating app match?

This is weird, right?

When I woke up to a Facebook message request from a man with whom I’d been casually chatting on the dating app Hinge, my first feeling was discomfort. “This is weird, right?” I thought.

I tend to see each of my online profiles as having a distinct purpose. I use Bumble and Hinge for dating, LinkedIn for professional networking, Twitter for promoting my writing and the occasional political rant, and Facebook and Instagram for socializing with friends (and some acquaintances). So when someone I categorized as belonging to the “dating” portal suddenly approached me through the “friends” portal, I was taken aback.

But after considering the message for a while, the circumstances leading up to it, and my own personal baggage, I started to think I overreacted.

Here’s some context: This guy and I made tentative plans for the morning of The Message. I am, I’ll admit, not the most responsive or active when it comes to Hinge messaging. He said his app had been acting up, and he wanted to know if we were still on for the date.

Maybe he was lying about the technical issue, or maybe he sent me a ton of messages I didn’t see and made this leap to get around my non-response. But it’s also possible he was just trying to be polite and follow up on plans when the original chat glitched.

The fact is, the nature of the online world—plus my own jumpiness leftover from a previous relationship—makes it hard for me to identify real red flags from simple misunderstandings.

My last relationship was toxic. When my ex and I first met, he bombarded me with over-the-top, jealous affection and attention, a tactic I now understand was “love-bombing.” This is where a person reels you in with extravagant displays of devotion, and once you’re hooked, uses this influence to exert control, often leading to more harmful manipulation tactics like isolation and gaslighting.

The relationship lasted for two years and three years later, I’m still unraveling the layers of mind games. I’ve been suspicious of too much too soon from dates ever since.

Virginia Gilbert, a psychotherapist specializing in sex and love addiction, says my reaction to the Facebook message might be a case of “hypervigilance.”

“When people have been traumatized, sometimes you see problems where there aren’t any,” Gilbert says. She calls this instance a “yellow flag,” meaning it’s smart to slow things down and proceed with caution, but it doesn’t necessarily mean this guy is a bad person.

If he’d been messaging constantly, getting overtly sexual too soon, or ignoring my cues to leave me alone, however, that would have been a clear red flag.

Ramani Durvasula, a psychologist who focuses on narcissism in relationships, says it comes down to boundaries, which are all relative depending on who you are. One person, like me, might view social platform switching as an overstep. But someone else might think of the online world like a shopping mall and social media accounts like stores where you’re free to hop from Facebook to Bumble to Twitter. Our whole lives are already online, anyway.

Still, it’s important to recognize that boundaries are like fences, and you can choose who you let in. If I had felt more connected to this guy, maybe I wouldn’t have been so turned off by the Facebook message.

Ultimately, we set rules for ourselves and others when it comes to our online lives and establishing etiquette in a pretty blurry space.

Where did we land on the ghosting debate, for example? How long should you wait for a response to a text? What do you owe a person you’ve only interacted with through the internet?

Gilbert and Durvasula both agree that online interaction can lead to a sense of false or virtual intimacy, where you think you know a person better than you actually do.

This false sense of intimacy makes it hard to judge whether this person is a good fit for you—and can lead to accidental oversteps and lowered inhibitions. Gilbert calls this phenomenon the “disinhibition factor,” which means people online “say things that they wouldn’t say to your face.”

If someone cancels a first date last minute, for example, and the other person responds in anger, who’s at fault? Is it the person who was disrespectful of the other person’s time at fault, or the one who popped off in response? The thing is, they don’t really know each other. If there had been an established relationship, maybe the first person wouldn’t have canceled the date, and maybe the second person would have been more understanding.

In my situation, did I owe it to a guy I don’t really know to be more communicative? Was he in the right to find me on my Facebook?

There is no universal etiquette for internet dating yet, so we have to make it up as we go along. For me, that means communicating my personal boundaries more clearly.

Durvasula says instead of letting my knee-jerk reaction always go to, “Nope, too much,” a more productive reaction might be, “Oops, better communicate.” Instead of immediately backing away to anything that feels like too much, I might instead say, “I enjoy spending time with you, but I’m more comfortable with a slower pace.” And if the person is the raging narcissist I’m always afraid they’ll be, they’re going to walk away.

In the end, I responded to the message by canceling the date. The guy didn’t freak out or send any angry replies; he told me he understood and to have a great day. Did I prematurely let a maybe-great dude go because of my own hangups? It’s possible. But my boundary still felt right to me and in the end, I stick by that.

Kathleen Walsh is a freelance writer and editor in New York City focused on the intersection of feminism, culture, and politics. Her work can be found in Cosmopolitan, Romper, and elsewhere.