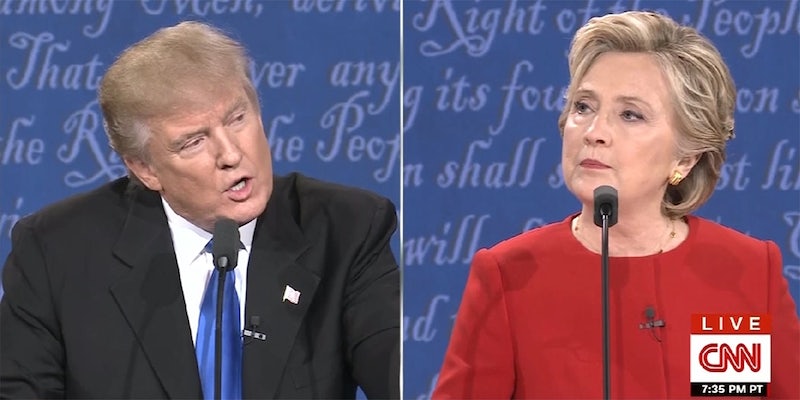 Donald Trump ‘manterrupted’ Hillary Clinton over 50 times during the debate

It's a practice many women are too familiar with.

Monday night was a historic night as Hillary Clinton became the first woman from a major political party to appear in a presidential debate—but it also became a show of something many women are all too familiar with.

Within the first half-hour of the debate, people started to notice that Republican presidential nominee Donald Trump interrupted Clinton quite often as she answered moderator Lester Holt’s questions or rebutted Trump’s responses. While they might not have known to what extent, websites such as Vox were dutifully keeping track of how often those interruptions came in.

It is very obvious that Clinton has spent her whole career dealing with men interrupting her and talking over her. #debatenight pic.twitter.com/H9VrlO7DXV

Trump interrupted Clinton 51 times during the #debate. She interrupted him 17 times. Every woman everywhere: "Sounds about right."

My friends & I were taking shots every time Trump interrupted Clinton. My BFF Chad is dead :(

Many saw parallels between Trump’s frequent interruptions of Clinton and the frequency of male interruptions that occur in the workplace, which is often called manterrupting. Studies show that women are interrupted more often than men, who usually talk more in meetings. Women talk less (although they’re often believed to talk more), and the male executives who talk more are perceived as being more competent than female executives who do.

By the end of the debate, the number of interruptions had crawled up to 51.

.@HillaryClinton was interrupted 70 times during the first presidential debate. @realDonaldTrump was only interrupted 47 times. #DebateNight pic.twitter.com/QmFTwM63Bk

When placed together in a supercut, it’s pretty overwhelming.

Clinton interrupted Trump as well, but that number is significantly smaller at 17 times throughout the debate. And Holt interrupted both Clinton and Trump in his capacity as a moderator—but that was usually to do the necessary job of fact-checking Trump.