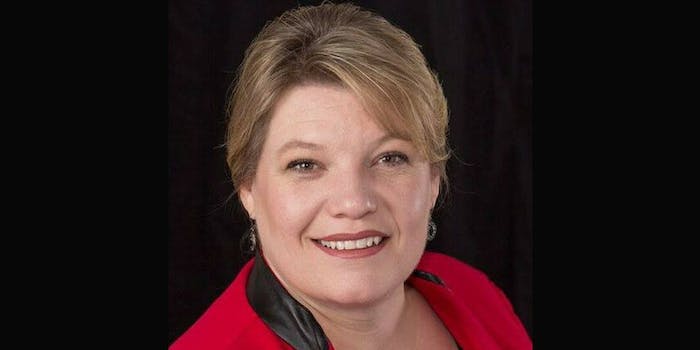 Several Hildale, Utah, city employees belonging to the Fundamentalist Church of Jesus Christ of Latter-Day Saints (FLDS) have resigned after the election of four non-members to city council and mayoral positions. The mayor, Donia Jessop, is the town’s first female leader and a former member of the polygamous sect.

According to St. George News, at least one of the 11 city employees cited religion in his resignation, saying his beliefs prevented him from “following a woman, and from serving on a board with apostates,” or people who aren’t in the religion, which has previously been disowned by the Mormon Latter-Day Saints.

Hildale is a community of fewer than 3,000 people, 20 percent of which are FLDS members. Voters elected Jessop by 25 votes in November against the FLDS-backed incumbent in the town’s first election in its 100-year history. Previously, church members sponsored town leadership. Jessop and non-FLDS council members Maha Layton, Jared Nichols, and Jvar Dutson were sworn in in January.

Jessop told the St. George News she invited each of the 11 employees to stay, and that no city services have been interrupted as a result of the departures, citing the employees’ graciousness to have found replacements before they left.

Hildale shares about 50 city employees with Colorado City, Arizona, another town along the Utah-Arizona border with a large FLDS population. Jessop said each of the employees gave two weeks’ notice and offered to help train new employees beyond the two-week transition. City leaders across Washington County, to the east of Hildale, also reached out to Jessop to offer support.

“It’s easier to cope with this because it’s not personal, they are just following what they believe,” Jessop said. “We have to keep moving forward.”

According to Newsweek, the FLDS previously made headlines in 2011 when its leader, Warren Jeffs, was sentenced to life in prison for sexually assaulting girls, including his biological daughter and the minors he married, and forcing minors into marriage with older men. Some of Jessop’s family were excommunicated from the FLDS nearly 10 years ago, leaving Jessop to decide to leave the community, moving her husband and 10 children outside of the town.

In 2016, two federal juries have found Hildale guilty of discriminating against non-FLDS residents, not providing police protection, building permits, or water hookups on the basis of not being affiliated with the church. Hildale police were found guilty of making false arrests and unreasonable property seizures and were ordered to be retrained. As a result, the town is under court supervision for 10 years.

That same year, Jessop moved back to Hildale to help create a support system for “cult” survivors. Through the Short Creek Community Alliance, non-church members advocated for change in the town’s government. She told Newsweek in November that police had continued to follow FLDS rules, and refused to respond to her calls when children vandalized her campaign signs and broke into her house during her campaign.