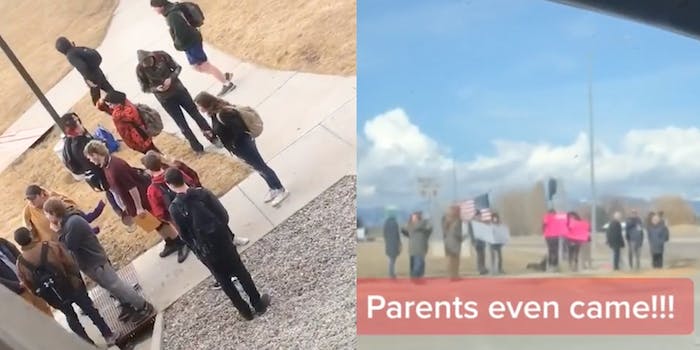 ‘I’m embarrassed for them’: TikToker puts classmates who participated in high school anti-mask walkout on blast

The protest was attended by 'less than 30 kids.'

A Montana student is roasting her classmates on TikTok for what was a seemingly futile attempt at a “walkout” in protest of face masks.

“So we had an optional mask walk out / protest,” TikTok user @supremeleaderkyloren wrote in the now-viral video, posted last week.

The user, who goes by Ben Swolo, wrote that “less than 30 kids” showed up to the “protest,” with a shot of their gathering recorded through a window from a higher floor.

In the shot, the few maskless students are seen hanging around outside.

Swolo also shared other instances from the protest featuring parents standing on the roadside with signs, placards, and American flags.

“Parents stop the lies and abuse!” read another. “Home school!”

According to Swolo’s post, there were more parents than students at the protest.

Montana medical professionals are currently fighting a bill that would allow unvaccinated children to attend schools. There are also some health professionals actively advocating against the vaccine.

Swolo’s video has received almost 25,000 views. Many are expressing their frustrations and are joking about the protest in the comments section.

“I’m embarrassed for them,” the top comment on the video reads.

“The parents wanted covid that badly,” wrote one user. “Shame. well not really.”

“I love how kids would rather go to class than attend that protest,” wrote another.