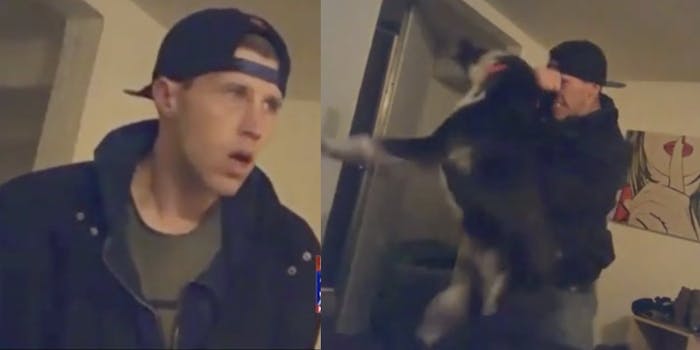 In the disturbing video, Gregory Burrell is seen strangling and throwing the dog.

A Colorado man is facing burglary and animal cruelty charges after he was caught on camera entering his roommate’s room and abusing her dog, KDVR reported.

In a video released by Metro, 31-year-old Gregory Burrell is seen lifting up the dog and strangling it with the leash it is wearing. The incident occurred at the shared home in Idaho Springs, Colorado.

The roommate reportedly set up a hidden camera in her room following a theft there. The camera then caught Burrell abusing her dog.

The video shows Burrell entering the room, coming down the steps, and looking around with a confused look on his face. He then looks down, picks up the dog, identified by Metro as Rebel, and twists it by the neck with the leash as the dog struggles to free itself.

He also throws Rebel against the wall.

When confronted by KDTV about why he did what he did, he said, “Why don’t you ask her that?” He said he is a dog owner himself and that “of course” he felt bad about it.

“My actions were out of haste, they were wrong, yes they were,” he told the local news channel. “I’ve owned many dogs, I own dogs now. I’ve never been violent, so yeah I made a mistake.”

He also said he had permission to be in the roommate’s room and mentioned that a woman owed him money. It is unclear, however, if the woman in question was the roommate.