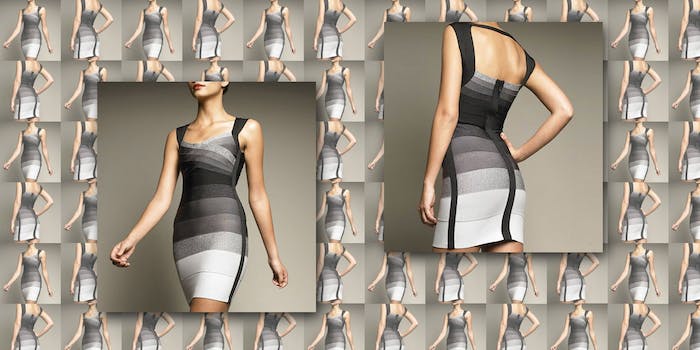 Are you too gay, fat, or poor to wear an Herve Leger bandage dress?

Update 9:10am CT, Aug. 18: According to Page Six, Patrick Couderc has left the company. A representative for BCBG Max Azria, of which Herve Leger is a subsidiary, told the paper that Couderc’s controversial statements ‘are not a reflection of Hervé Léger by Max Azria or MJH Fashion ideals . . . he is no longer associated with the company.’

In an interview Saturday with Britain’s Daily Mail, Herve Leger head designer Patrick Couderc said so many offensive things about women that the Internet is still reeling—and fuming.

The designer’s comments were so outrageously body-shaming that even the uber-tabloid Mail called the interview “dangerously outspoken.”

Speaking about the fashion house’s iconic bandage dress—which has been ripped off by every smaller designer and worn by every celebrity from Caitlyn Jenner to Taraji P. Henson—Couderc said that women who are “voluptuous” or have “prominent hips and a very small chest” should simply not wear Leger dresses.

Couderc probably should have stopped there. But instead, he went on to promote tired old stereotypes about lesbians while managing to simultaneously slam older women, the working class, and the self-esteem and body-image issues of women of all backgrounds.

Here are the highlights:

“If you’re a committed lesbian and you are wearing trousers all your life, you won’t want to buy a Leger dress. Lesbians would want to be rather butch and leisurely.”

“You women have a lot of problems. You will lose the plot. You will come and you will put a dress on and you’ll be in front of the mirror, like, ‘Argh, I’m so fat.'”

“Yes, you have a 12th of an inch around your stomach, it’s not really a disaster, and what you’re not noticing is that your cleavage is about two inches too low because you are 55 and it’s time that you should not display everything like you’re 23.”

After Couderc’s interview published (with updated quotes on Sunday) and managed to piss off nearly every segment of the female population, women took to Twitter to ridicule Couderc’s comments.

UK Director of Herve Leger on body con dress. Are u a *committed* lesbian? #butchandleisurelyhttp://t.co/2K8bv4xybv pic.twitter.com/tYHBefdw6S

As a voluptuous lesbian, this dress most definitely isn't for me, because @herveleger is a lesbophobic body fascist https://t.co/EDKxMNmp0I

The best comments from comedian Margaret Cho on Sunday and Monday. Never one to turn a blind eye to body-shaming or homophobia, Cho recalled her own years of experience with fashion industry and shop clerk-instigated fatphobia—and blew her fuse in the best way:

How can fashion change to celebrate women rather than continue #bodyshaming us?

I can't ever wear Spanx even tho they have sent me gifts. i need to #freethebelly #eventhenamesoundslikepunishment https://t.co/BQKvOl6Rts

I like corsetry – i think corsets make us more voluptuous – bigger, rounder, lush.
Spanx seek to 'minimize' us! https://t.co/8hgYsQgV4f

Yes but I like the feeling. I'm not sure why #fetish and I can take a shit in a corset #butnotspanx #alwaysshitting https://t.co/x7owx4APCn

And of course, the Herve Leger fiasco would not be complete without at least one massive lesbian icon (well, besides Cho) weighing in as well. Tennis star Martina Navratilova kept her statement short and sweet.

Bandage Dress Not For 'Voluptuous' Women Or Lesbians, Says Herve Leger Director- what a total and utter idiot http://t.co/eli1cAyzjT

Photo via sneakoutfitters/Flickr (CC BY SA 2.0) | Remix by Jason Reed