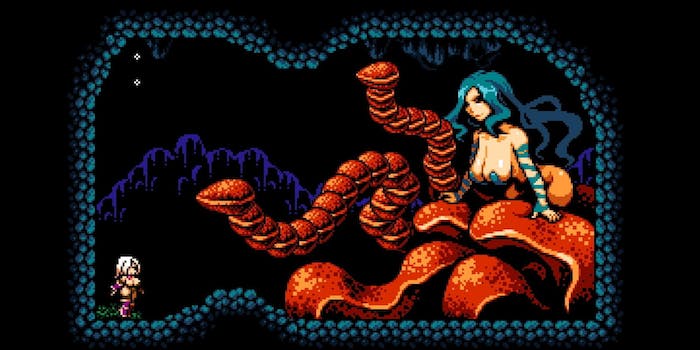 Developed by doujinshi (or self-publisher) Libra Heart with art contributed by pixelteishoku, Castle in the Clouds follows a busty bounty hunter named Lily in a fantasy world filled with bandits, adventurers, and plenty of monster girls. Players travel through forests, caves, dungeons, and icy terrain where gigantic monster women are pit against the player in boss battles. The game is filled with sex scenes, from vanilla encounters to nonconsensual gang bangs to kinky tentacle sex.

Critical Bliss is run by LewdLogic, the founder of LewdGamer, and the publisher functions based on the idea that there is an established audience for traditional video games with explicit sexual material. In one example, Logic linked the Daily Dot to the r/castlevania subreddit, where Libra Heart’s Midnight Castle Succubus was praised as a “super solid” take on Castlevania that “pays a ton of tribute to the series.” Critical Bliss plans to publish its localized version of Midnight Castle Succubus before Castle in the Clouds.

Midnight Castle Succubus and Castle in the Clouds are still being refined before launching on Steam, although the latter can already be wishlisted. In the meantime, Critical Bliss announced two other titles from the Succubus series, Sword of Succubus and Tower of Succubus, will also receive localizations on Steam.