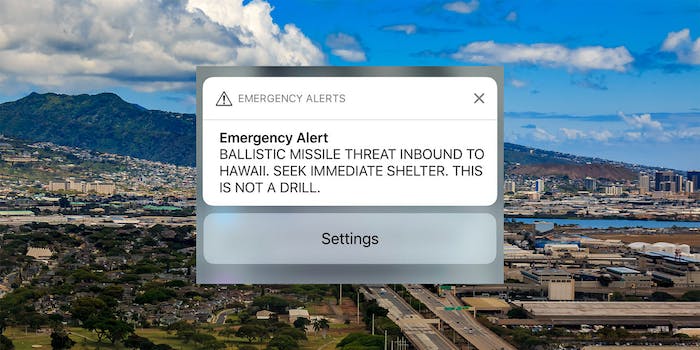 His doctor says he never had heart problems before the alert.

A man who had a heart attack shortly after a false missile alert was broadcast in Hawaii early this year has filed a lawsuit against the state.

On the morning of Jan. 13, Hawaii residents received the following message on their phones: “BALLISTIC MISSILE THREAT INBOUND TO HAWAII. SEEK IMMEDIATE SHELTER. THIS IS NOT A DRILL.”

The state was gripped with panic and confusion for nearly an hour as local TV changed from their regular programming to report on the incoming missile. Then they were told that the alert was sent by mistake.

Fifteen minutes after the initial alert was sent, Hawaii resident James Sean Shields began to feel a severe pain in his chest. He and his girlfriend, Brenda Reichel, had been on the way to the beach, wanting to spend their last moments in a beautiful place as they believed the missile would be coming shortly. The missile alert was called off, but that did not stop the pain.

Shields and Reichel ended up going to a community clinic, where Shields went into cardiac arrest. After being resuscitated by the clinic doctor and paramedics, he was transported to a nearby hospital where he was diagnosed with a heart attack.

The couple filed a lawsuit against the state of Hawaii on Tuesday, seeking an unspecified amount in damages. Reichel joined the lawsuit to seek damages for the “emotional upset” caused by watching her romantic partner nearly die multiple times as a result of the heart attack. According to Shield’s doctor, he had no history of heart conditions or heart health issues prior to the false missile alert.

The lawsuit names the state of Hawaii, as well as the then-administrator for the Hawaii Emergency Management Agency, Vern Miyagi, and several other state employees and entities that are involved with the missile alert system. Gov. David Ige reportedly knew the alert was false two minutes after it was sent, but didn’t inform residents for 17 minutes because he couldn’t remember his Twitter password. The state attorney general has said they will review the case carefully and respond in a timely manner.