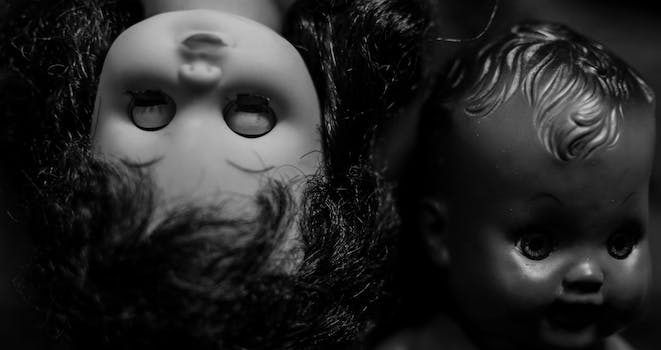 Inside the curious, creepy world of haunted doll collecting

They may look spooky, but for collectors, these dolls have the power to heal.

Internet outages are frequent at Kat Blowers’ house. Lights flicker, channels change at random while she and her husband watch television. The electronic interference tends to peak around new and full moons, she told the Daily Dot, phenomena she attributes to living in a house full of haunted dolls.

Blowers, a 41-year-old Arizona resident, sells the dolls on her Etsy shop, alongside antiques, vintage items, and jewelry. Most of the spirits are, if not exactly friendly, manageable—but that doesn’t mean the energy in her house isn’t unrelentingly “frantic and hectic.” Sometimes, human shapes materialize in the hallways, she said. Dolls that were carefully shelved according to their listing status wind up in other areas of the house entirely.

“We had a very active child spirit here who would slam open all the cupboards in the kitchen and bang pots and pans—that was actually really scary,” Blowers recalled.

Another time, the ghost of a woman took a shine to Blowers’ husband. “She would drop my jewelry all over the house, drop my wedding ring in the dog food, or the bathtub,” Blowers said. “She scratched me, scratched my face, and my husband had the sense of a woman in his personal space.”

Eventually, they took that doll out to the desert, cut her up, burned the pieces, and buried her remains “to the four winds.”

“We feel like we live in a house with a thousand people in it,” Blowers said. “Our friends and neighbors notice it. They think our house is creepy and scary.”

Blowers got into the haunted doll business inadvertently. A few years ago, she won an estate at auction for under $1,000, acquiring an entire house full of filthy and dilapidated items. Included in the haul were “tons of witchcraft books,” she said, and almost 1,700 sellable dolls.

“We knew something was weird with them, we could feel it,” Blowers remembered. “But we never assumed they were haunted, we just thought they were strange—very strange, with a weird vibe.” Also, she added, the sheer volume of dolls struck her as odd.

The couple listed them on eBay along with other items from the estate, and soon the reports of strange behavior began pouring in from buyers. Blowers began testing the dolls, taking electromagnetic field readings, recording electronic voice phenomena, meditating with them, and asking them to visit in dreams (Blowers says she and many of her family members “have the gift,” and that she has “always been able to speak to the dead).

And, sitting atop this pile of apparently inhabited vessels, Blowers realized that there was a market not just for dolls, but for “haunted dolls.” So she opened her Etsy shop. She still has about 150 dolls from the original lot to sell, but her reputation is such that people looking to clear creepy figurines from their shelves often send them to her. “One guy drove all the way from Oklahoma to give us a box of dolls that was tormenting his family,” Blowers said.

Blowers is just one of a community of sellers feeding a fairly booming haunted dolls economy that has been thriving online for quite some time: In 2015, Vice reported that people were spending thousands on platforms like eBay and Etsy to build their ranks. In a frankly iconic post from 2010, seasoned eBay collector misslady113 presented enthusiasts with the What to Expect When You’re Expecting of haunted doll collecting.

According to paranormal investigator Michael Cardinuto, founder of Long Island Paranormal Investigators, popular fascination with the supernatural has risen steadily over the past decade, resulting in a surplus of televised ghost hunts and spirit-centric horror movies and vendors who cater to people with an interest in the otherworldly. Dolls, though, enthrall the paranormally inclined with particular potency.

Cardinuto also speculated that people might be more inclined to view dolls as haunted because they’re a favorite accessory of kids, who he says are, on the whole, “more perceptive to the paranormal than adults are.” A spirit may enter a doll because a child is close to it, and that pattern may make people more inclined to believe dolls are easily possessed. (See the storied Robert and Annabelle dolls for anecdotal evidence.)

But in his 15 years investigating the supernatural, Cardinuto hasn’t seen many haunted dolls. Somewhat surprising if you believe what you see on eBay and Etsy, where haunted dolls are a dime a dozen. Cardinuto suspects many of these are bullshit.

“I can take a glass jar and say it’s a ghost in a jar, and I could sell that and probably make more than I’m making at my job right now,” he laughed.

And indeed, in a post for Cracked, one “broke college student” who got into “haunted” doll sales outlined their process of fleecing eBay customers. Having identified paranormal objects as a potential cash cow, the seller attested to flipping cheap, non-spirited items using rigged props, photoshopped images, and other tricks. eBay and Etsy seem to have picked up on the potential for scamming here: Both have instituted vendor guidelines to absolve the company from blame when consumers find themselves with regular old Hummels rather than the haunted Hummels they expected. Basically, eBay and Etsy sellers can’t promise their products come with ghosts attached. It’s shop at your own risk.

The haunted doll vendors of Etsy with whom I spoke frowned upon fraudulent sales, and most viewed haunted doll collection as a community populated by psychic types. Regardless, hoaxes happen. Blowers flagged overpricing as a key indicator of inauthentic objects: “Dolls should be priced according to their worth” as dolls, Blowers explained. Interested parties should pay attention to the doll’s size, style, and craftsmanship. Buyers should be incredulous of “anyone trying to charge a few hundred bucks for a doll that can be purchased at a department store for $25,” she said. Expect to pay the price of the vessel, regardless whether the spirit may or may not be inside it. Because, ultimately, whether or not an object presents itself as haunted is a subjective equation.

When it comes finding the right home or new owner, Etsy shop seller and haunted doll collector Quintess told the Daily Dot, “dolls actually have preferences and choose people, like the way that pets choose people.” In Quintess’ experience, spirits attached to haunted dolls often communicate telepathically with potential owners, imparting a mood or inkling to a buyer that establishes connection. Recognizing that all of this will sound strange to people who don’t believe in the paranormal, Quintess emphasized that a haunted doll’s relationship to its human relies on a unique energy exchange.

“If a doll never appears haunted to you, it could be to somebody else,” she said. “It’s just a matter of personal perspective and what’s right for the buyer.”

In other words, haunting is in the eye of the beholder: “If they don’t want a haunted doll, they’re probably not ever going to get one. It has to be their own interest,” she added.

I put that question to the buyers, messaging a number of customers sourced from highly reviewed shops (Blowers’ and Quintess’ included). Marysa, an antiques collector with an interest in anthropology, restores dolls and statues as a hobby. She acquired her first haunted doll about three years ago by chance. Marysa was looking at dolls on a website and felt drawn to “a gorgeous Southern belle dressed in a white lace gown,” who she says is inhabited by the spirit of a healer who passed away in the 1960s. Marysa now owns roughly 100 dolls, picked up at “antiques fairs, toy museums, garage sales, church bazaars, online stores [and] from other doll enthusiasts.” She’s not yet sure that all of them are haunted—she still has to test some of them—but she looks for “spirits that perform energy work, healing, ancient wisdom, meditation,” she said, adding, “I also like a creative, happy, organic type of energy.”

Cynthia Whelan, a 35-year-old retail sales assistant who began collecting haunted dolls just this June, now owns 99 of them, the majority purchased from Blowers’ shop. Whelan hails from the U.K., but prefers dolls from the U.S. She says her collection has served as “a spiritual support machine that keeps [her] alive and protects [her] from wicked people.”

She believes it’s a source of courage that helped her rebuild her own spirit after she left her abusive ex-husband. Whelan’s dolls choose her, she explained: They move their eyes, switch positions, sometimes twitch their mouths “as if they were trying to speak.” She says she’s heard sounds like a vibrating cellphone, chanting, and whistles emanating from her collection. But above all, Whelan believes, her haunted dolls keep her safe.

According to Blowers, the typical haunted doll customer is a person with paranormal experience, someone used to seeing spirits. Some are dealing with death, loss, or other trauma. “I think having a spirited doll helps them to grieve,” she speculated.

Of course, whether or not a doll proves an emotional boon depends on the energy attached to it, at least according to the vendors and customers with whom I spoke. Most everyone acknowledged that dolls can be manipulative, and many of them had encountered negative spirits in the course of collecting. Blowers keeps those dolls in her garage but maintains there is a market for them. And that’s one thing that strikes Cardinuto as risky: He has seen skeptics acquire allegedly haunted dolls online only to balk when the spooky occurrences start unspooling. Buying a haunted doll or any other object is a gamble, he said: “You never know what is attached.”

“The majority of the time, it’s nothing that’s going to be harmless. You get rid of the doll, the activity goes away,” Cardinuto continued. But say the attached spirit is in fact a demon—that’s liable to latch onto your home or you, and prove a hell of a lot harder to shake.

“This stuff does happen. It’s real,” Cardinuto said, a gentle warning to those who would laugh off demonic possession as something that only happens in movies. “My advice to any amateurs: I wouldn’t mess with it at all.”