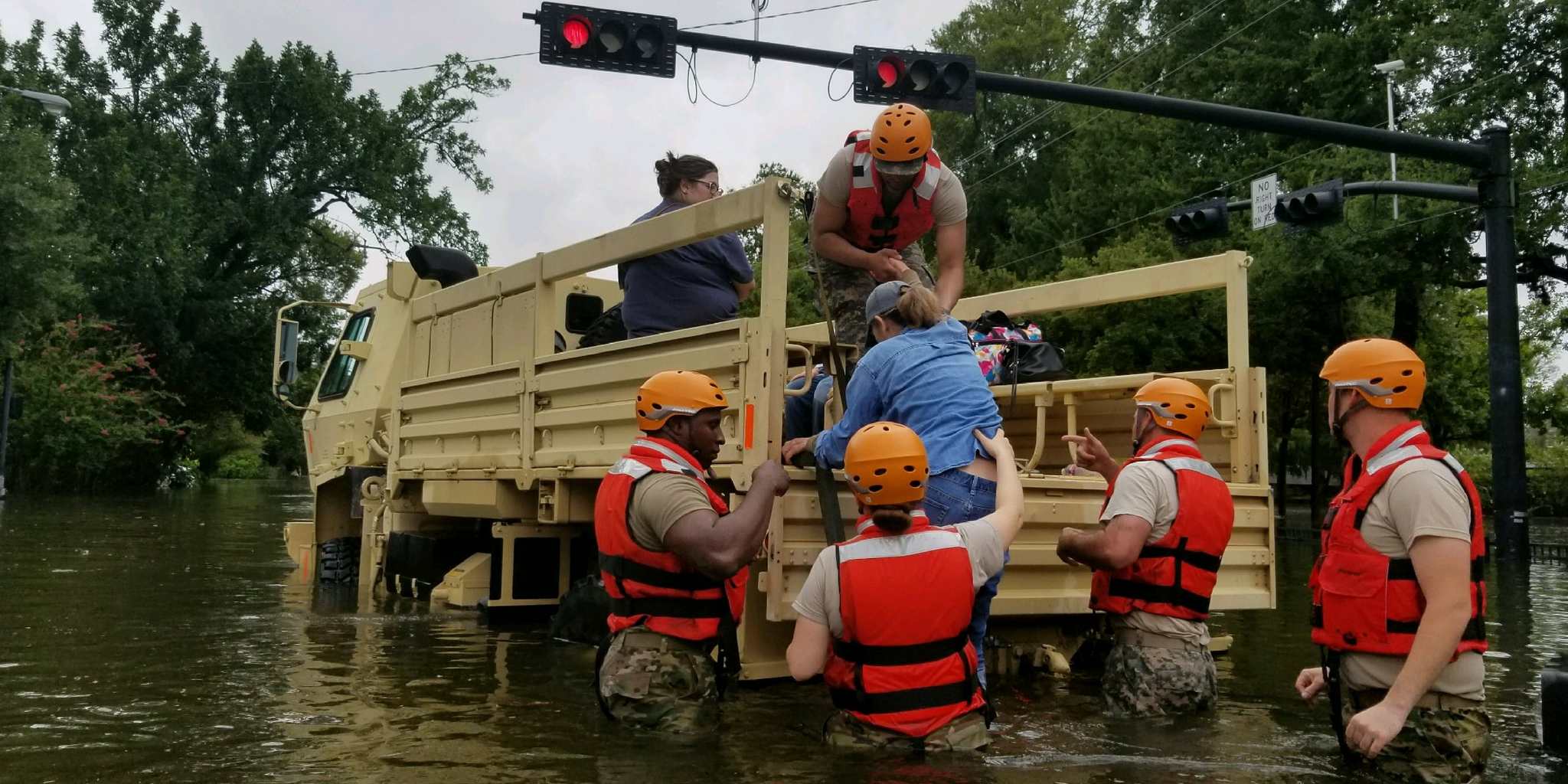 Organizations beyond the American Red Cross need your help.

My sister is in Houston and I don’t know what to do.

She’s a senior at the University of Houston, which pushed back the start of its fall semester because of the flooding surrounding the campus. She works at a family-owned company, and so, anticipating potentially having to work through Tropical Storm Harvey and not wanting to miss the first week of her last semester, she hunkered down with a group of her classmates and their pets at someone’s home in Houston’s Third Ward. She’s safe, but the tight quarters are already making an intense situation more stressful for her and her friends.

Meanwhile, 30 minutes north, a friend of mine and his buddy have driven around his fishing boat hitched to a pickup, rescuing droves of people from their flooding homes, as part of the “Texas Navy.” He and others are following Harris County Judge Ed Emmett’s call for private citizens to help the police, fire department, and Coast Guard, all of which are overwhelmed with relief efforts. He said he can’t believe he’s in a major catastrophe—it wasn’t until he pulled an 11-year-old girl through a window and onto the craft that the reality of the disaster began to sink in.

And here, in Austin, my college roommate, her family friends, and many of her siblings are checking in with their parents in Houston. Several of them drove up for the weekend for a family party and are now unable to drive back home and don’t know when they’ll be able to return. Last she checked, a family friend’s apartment complex in Downtown Houston was already flooded past the first floor and into the second—the friend lives on the third, and the rain is expected to persist into Friday.

I, along with many other Texans directly unaffected by the storm’s flooding, can’t but helplessly watch as millions of our family members, friends, and their neighbors find themselves displaced. We’re refreshing news feeds and updating text chains, signal boosting helpful Twitter threads about relief efforts and stories of the damage, for any semblance of helpfulness that is more than watching in horror at what’s happening to this state that we love.

Over the past five days, many companies have pledged funds or contributed their own relief efforts. Texas grocer HEB has served more than 8,000 meals in Victoria, Texas, and has deployed multi-purpose Disaster Relief Units to help people get medical care and pay bills on time. Anheuser-Busch’s Georgia brewery has halted beer production to produce and ship more than 155,000 cans of drinking water to Baton Rouge, Louisiana, and Arlington, Texas. Michigan company KL Outdoor has sold 2,000 kayaks to Walmart to be sold or donated to rescue efforts throughout Texas and Louisiana.

From Beyoncé and her pastor to JJ Watt and Paul Wall, famous Texans and more are also doing their part to save their communities. Even locally, Houston drag queen Regina Thorne-DuBois has launched her own ongoing pledge drive via Facebook Live and has so far raised $3,000 for the Houston Mayor Sylvester Turner’s relief fund.

In a state of shock, it’s natural to feel lost in how to best contribute to disaster relief—as is wanting to throw money at the situation and hope for the best. However, despite your best intentions, making a one-time text donation to the American Red Cross or sending relatives down to Houston with a trailer of donated clothing comes with their own setbacks.

Collected from Pro Publica and the Associated Press via the Houston Chronicle, here are some guidelines that can help you maximize your relief efforts:

Always research the organizations you’re interested in contributing to, whether that be by using watchdog organizations such as GuideStar, Charity Navigator, and the American Institute of Philanthropy, or Googling Houston news reports for a charity’s past contributions. Know that as a donor, you can demand transparency and ask nonprofit organizations to make public, detailed spending disclosures. Additionally, US-CERT, the chief governmental agency for cyber threat detection, is warning of online scams posing as disaster relief, particularly email attacks.

Most importantly, be strategic in your relief effort. Donating to local over national organizations can sometimes be more effective since those organizations are aware of the needs of the community, though both sizes of organizations have their own roles in disaster relief. Unsolicited material donations may slow down relief efforts and become more costly than monetary donations, especially when these donations require further transportation and logistics planning.

As the National Weather Service has previously stated, parts of Texas will be uninhabitable for possibly months after Harvey passes, and FEMA anticipates being in the state for years to come, making long-term donations crucial for long-term recovery. Consider saving money to donate in the following weeks or months, or set up a small monthly recurring donation if possible.

While donating via text might be easiest for you, charities aren’t able to collect those donations until your phone company releases the funds—which, yes, will still help efforts in the weeks to come, but won’t make an immediate impact if that’s how you’re looking to assist.

To help on a localized level, here are several organizations collected from reports by Texas Monthly, the Houston Press, and the Austin-American Statesman that could greatly use your financial contributions, or more:

Volunteer Houston has launched a virtual volunteer reception center to help aid nonprofit agencies and organizations with relief efforts. People interested in aiding the Houston area are to complete an intake through the reception center and only deploy once officials declare the area safe to do so.

The Driscoll Children’s Hospital in Corpus Christi is accepting financial (and blood) donations.

The Houston Coalition for the Homeless is accepting financial donations to facilitate shelters and distribute information on shelter resources. Additionally, Airbnb is allowing people to list their spaces on the platform to host displaced Texans.

The Texas Library Association is not able to take in kind donations and is currently assessing potential volunteer coordination, but is open for financial donation. Additionally, children’s author Kate Messner has launched a literary talent auction to benefit the American Red Cross Hurricane Harvey Relief fund.

While not necessarily local, Amazon and Whole Foods is matching cash donations made through Amazon for up to $1 million to benefit the Red Cross fund, and has put together an Amazon wish list specifically for the Red Cross’ efforts.