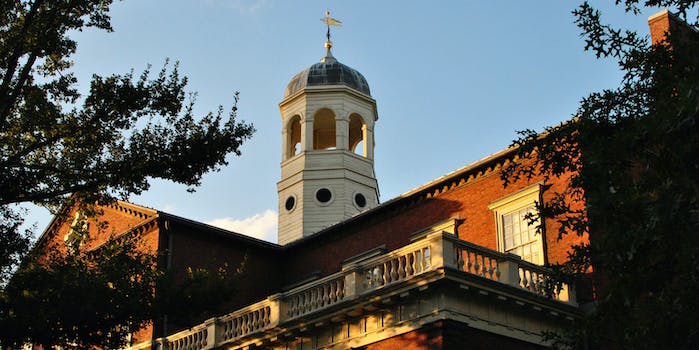 Students were told not to return to campus after spring break.

As universities across the U.S. grapple with establishing preventative measures for coronavirus, one of America’s most prestigious schools has instructed students to pack up and leave campus.

The Harvard Crimson reports Harvard officials have asked students to not return to campus from spring break, which begins next week. Their classes will move online later this month.

The university’s announcement led to immediate confusion among students online. Many questioned what resources will be provided to students—especially first-generation, low-income students—who rely on campus housing for shelter and food.

According to the university’s webpage dedicated to coronavirus updates, students will be permitted to stay on campus if they face “extenuating circumstances.” However, class instruction will remain remote.

The university also reported dining halls “will continue to provide service for individuals who necessarily remain on campus after (March 13).”

Local news outlet Boston 25 spotted at least one student on the Harvard campus carrying moving boxes, according to a tweet from reporter Joy Dumandan.

“We’re really left with a lot of unanswered questions, and I think that’s caused a lot of mass anxiety across the campus,” Harvard freshman Aaron Shirley told the Boston Herald.

As of Tuesday afternoon, a little over 800 individuals have been affected with the virus in the U.S., and about 27 people have died from the virus, according to the New York Times.

On Tuesday, Massachusetts Gov. Charlie Baker declared a state of emergency as the number of confirmed and presumptive coronavirus cases in the state rose to 92.

In a letter to Harvard Students, university President Lawrence Bacow said the decision “is consistent with the recommendations of leading health officials on how to limit the spread of COVID-19.”

Students have said there’s uncertainty about whether the school will still hold end-of-the-year graduation festivities, according to the Boston Herald.

“Many of my friends are not from the area so it’s going to be very difficult to say goodbye them so quickly when we thought we had a little bit more time to spend together,” Harvard senior Elmer Vivas told the Herald.

Harvard senior Hakeem Angulu, who’s from Jamaica, said his visa “necessitates that [he] stay in the U.S.” until he obtains further documentation.

According to Harvard, international students will still be considered enrolled in the university despite the directive to continuing classes online.

“The Harvard International Office (HIO) received guidance from the government that they intend to be flexible with temporary adaptations to classes,” according to the university’s coronavirus FAQ page.

The Harvard Graduate Students Union made numerous requests to ensure the financial stability and benefits for university workers amid the university’s responses to the coronavirus.

“While our members and workers across campus adapt to rapidly changing working conditions, it is the responsibility of the university to minimize financial uncertainty for these individuals and to ensure that everyone can follow appropriate public health measures,” the union said in a public statement.

Other academic institutions, including Princeton University, have also implemented campus regulations in wake of the coronavirus outbreak. Princeton announced Monday that it “will move to virtual instruction following spring break and decrease the number of gatherings on campus.”

The hashtag #CloseTheSchools has started to trend on Twitter as more institutions announced preventive measures to combat the spread of coronavirus.

Harvard expects to fully transition to online classes by March 23.

“As of right now none of my classes have been canceled for the rest of the week,” Wojtasik told the Daily Dot. “I’m expected to complete assignments and attend class while being unsure of where I’m going to live for the next six months.”

Wojtasik said many students, like him, feel inherently stuck on what to do if they’re not easily able to return to their families and move off-campus.

“Many students are in my same situation where we don’t have a ‘home’ to go to, whether because our places of origin have level 3 travel warnings, or because our families have disowned us for being gay —my case— transgender or rejecting our parents’ religion,” Wojtasik said. “We are all stuck in limbo.”

As classes will start to move online, students are also wondering, how exactly online classes will cater to their specific majors that require more in-class involvement. “I’m an art student,” Wojtasik said. “Three of my four courses are studio courses. How is a painting or sculpture class supposed to continue online in any meaningful way?”