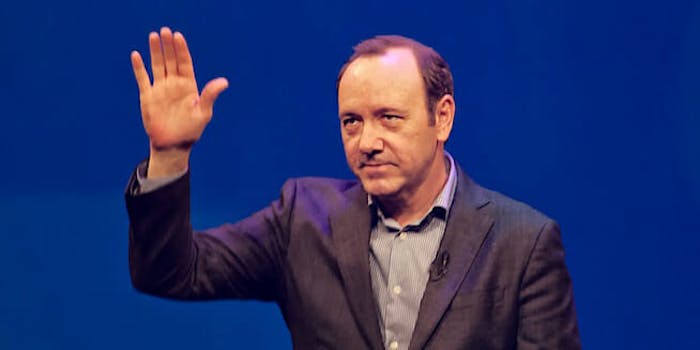 Another actor has come forward to accuse Kevin Spacey of sexually assaulting him.

Harry Dreyfuss, the son of legendary actor Richard Dreyfuss, wrote a first-person piece for BuzzFeed published on Saturday that detailed a scene from 2008 when he wrote that Spacey put his hand on his crotch while Richard Dreyfuss was actually in the room.

For the past nine years, Harry Dreyfuss said he tried to make light of the incident, recounting the story to friends in an attempt to humorize his traumatic experience.

“I did a lot of mental gymnastics to normalize my experience,” Dreyfuss wrote. “For the last nine years, whenever I would tell this story to people who refused to laugh—who insisted that I had gone through something profoundly wrong—I would always try to downplay it so they could just see the funny side. I especially wanted to discourage them from thinking that what happened to me was something I ever needed to speak publicly about.”

Now, Dreyfuss is doing exactly that.

He details the alleged scene as he and his father, seated in Spacey’s apartment, ran lines for a play that Spacey was directing and in which Richard Dreyfuss was starring. Though Richard Dreyfuss was in the room, Spacey sat close to Harry Dreyfuss, placed his hand on Dreyfuss’ thigh multiple times even as he tried to escape Spacey’s grasp, and then touched his crotch.

Harry and Richard Dreyfuss told BuzzFeed that Richard had no idea what was happening at the time and that his son didn’t tell him about what Spacey allegedly did for many years after. A Spacey lawyer told BuzzFeed, “Let me be clear, Mr. Spacey absolutely denies the allegations.”

Harry Dreyfuss explained why he’s coming forward now, writing, “As the allegations against Harvey Weinstein came rolling in, and so many women I know posted their stories of sexual abuse during the #MeToo campaign, I came to see how important it is to add my voice to the people who are demanding a better world. A world in which powerful men are no longer allowed to feel safe to do this, or far worse. In retrospect, what disgusts me about Kevin was how safe he did feel. He knew he could fondle me in a room with my father and that I wouldn’t say a word. He knew I wouldn’t have had the guts. And I didn’t.”

I love my son @harrydreyfuss more than I could explain with all the words in the world. And I am so incredibly proud of him right now. https://t.co/iLOxTxPe4n