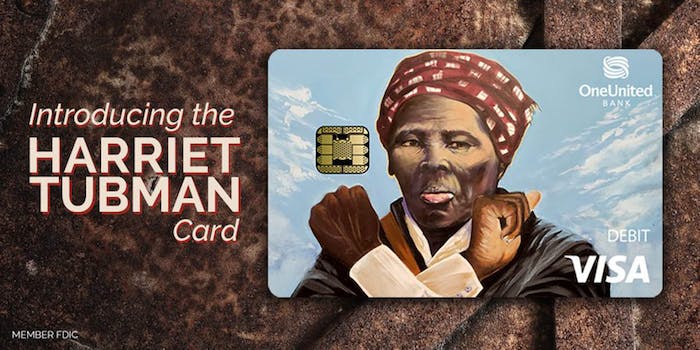 People on the internet aren’t happy about it, both for artistic and philosophical reasons. But some still managed to find found and irony in the notion.

The image on the card shows Tubman with her arms crossed over her chest, similar to the pose made famous in Marvel’s Black Panther as a solidarity gesture for citizens of the fictional African kingdom Wakanda.

On Black Twitter, people went the extra mile with scorn and humor to explain how the debit card was offensive to Black people.

Before we get to the jokes, we should contend with the idea that Tubman was anti-capitalist. The view is a popular one, given the notion that she “stole” herself and assisted others out of slavery, effectively freeing them from possession.

Tubman, however, was a spy for the Union Army during the Civil War and ran several businesses in New York. Still, it’s unlikely she would have supported herself being assigned valuation.

As for the “Wakanda Forever” pose, OneUnited Bank explained to one critic, “the gesture being used is sign language for ‘love'” and that “the card image is from the painting ‘The Conqueror’ by the internationally acclaimed artist Addonis Parker.”

Some people loved the idea but paused on the execution.

One Twitter user noted the irony of Tubman’s image on a debit card with a data-transmitting chip.

And still others unironically loved the concept.

Some found humor in the possible scenarios.

But most people seemed to hate the card with zest.