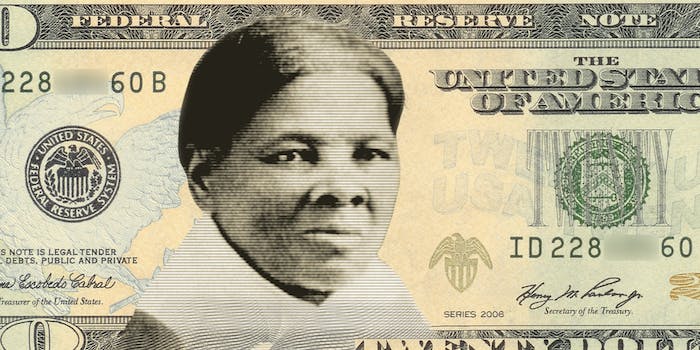 Photo via US Govt/Wikipedia Wikipedia (PD) | Remix by Jason Reed

Trump has a thing for Andrew Jackson.

Treasury Secretary Steve Mnuchin said Thursday that changing the face of the $20 bill from Andrew Jackson to Harriet Tubman is not necessarily on his agenda.

“It’s not something that I’m focused on at the moment,” he told CBNC.

Further pressed on the matter, Mnuchin said, “People have been on the bills for a long period of time. This is something we’ll consider. Right now we have a lot more important issues to focus on.”

Last April, Obama’s treasury secretary, Jack Lew, announced that the Civil War-era abolitionist would replace Jackson, a slave owner, on the bill, which would make her the first woman on U.S. paper currency.

As New York magazine points out, the current administration’s change of heart could be because Jackson has a fan in the president. In previous interviews, Trump has cited the former president—who was responsible for displacing 17,000 Cherokee in the “Trail of Tears,” a horrendous trek that ended in over 4,000 deaths—as a role model with “a big heart.” He also suggested Jackson was “angry” about the Civil War even though he was dead when it began.

Last year, when the bill change was announced, Trump said even though he thought Tubman was “fantastic,” swapping her in for Jackson was “pure political correctness.”

“Well, Andrew Jackson had a great history, and I think it’s very rough when you take somebody off the bill,” Trump said on the Today show.

The president then suggested she be put on the $2 bill instead—which is out of print.