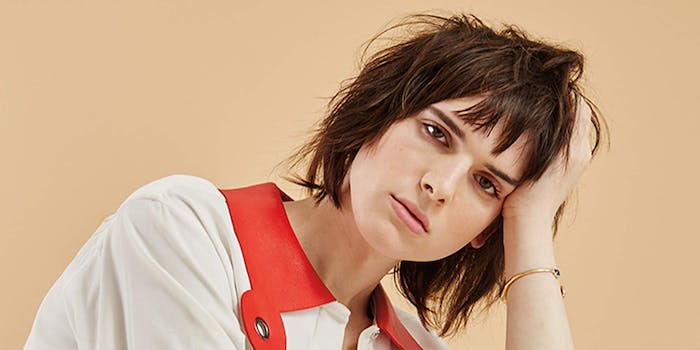 Meet Hari Nef, the transgender woman who’s about to take the modeling world by storm

Hari Nef has had some week. The 22-year-old graduated from the theater program at Columbia University on May 19. A few days later, she signed with IMG, one of the world’s biggest modeling agencies, which also represents Victoria’s Secret models and industry icons like Karlie Kloss, Gisele Bundchen, Cindy Crawford, and Tyra Banks.

But Nef isn’t just another fashion discovery. She’s a transgender woman who first made a name for herself through art and writing, and by building a social media following around her honest, weird, and biting humor.

Unlike the majority of fashion models, who are groomed like racehorses after entering the industry in their preteen years, Nef approached the fashion industry relatively late in life. At first, she viewed the industry with some degree of cynicism. In a December 2014 ID magazine interview, Nef said that she expected the fashion world to “dabble in transness for as long as transness is lucrative.”

But Nef clearly isn’t limiting herself to modeling. She also told ID that she hoped to become the first trans woman to win an Academy Award, making it clear that she isn’t planning on resting on her laurels anytime soon.

There have long been “stealth” models, or transgender women who aren’t out of the closet, in the fashion world. After 70s supermodel Caroline “Tula” Cossey had appeared in Vogue, Harper’s Bazaar, and Playboy, she was outed by a British tabloid, prompting her to essentially drop out of the fashion industry.

Unlike Cossey, Nef will never be stealth. She’s been out during her transition, writing pointedly about trans cultural and political issues since long before she signed with IMG. She’s also said that she only recently started hormone replacement therapy in 2014.

And that’s perhaps the most important thing about Nef’s signing with IMG: She doesn’t fully “pass” for a cisgender female, in the sense that she doesn’t adhere to conventional cisgender female beauty tropes. Her short, dark hair and tendency to pose topless reveal a body that is more about genderfuck than gender rules. She’s not just beautiful—she’s beautifully transgender.