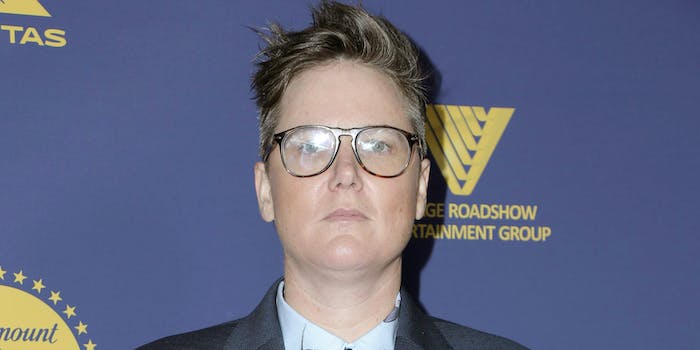 'Rejecting the humanity of a woman is not creepiness. It’s misogyny.'

It’s been a year of woke men, or at least men performing wokeness. Since the #MeToo movement began last fall, so-called “allies” have used their space to call out misogynistic practices in their fields. But Australian comedian Hannah Gadsby isn’t necessarily buying what she calls “good men.”

In Wednesday’s speech at the Hollywood Reporter’s 2018 Women in Entertainment gala, Gadsby took a specific jab at late night talk show hosts (calling them thinly veiled “Jimmys”), and pointed out the problem with men drawing the line between “good men” and “bad men.”

“The last thing I need right now in this moment in history is to have to listen to men monologue about misogyny and how other men should have to stop being creepy,” she said.

“Men are not creepy,” she continued. “Rejecting the humanity of a woman is not creepiness. It’s misogyny.”

That is not even the best part of her speech. She then pointed out that men often reposition this imaginary “line” based on who is being accused, adjusting it differently for their friends and peers. Like, you know, Jimmy Kimmel’s recent defense of comedian Louis C.K.’s return.

“You know why we need to talk about this line between good men and bad men? Because it’s only good men who get to draw that line,” she said. “We need to talk about this because guess what happens when only good men get to draw that line? This world. A world full of good men who do very bad things and still believe in their heart of hearts that they are good men because they have not crossed the line because they moved the line for their own good.”

“Women should be in control of the line, no question.”

If you’re wondering if the speech could get even better, it does.

“Now take everything I have said up until this point and replace ‘man’ with ‘white person’” she continued. “And know that if you are a white woman you have no place drawing lines in the sand between ‘good white people’ and ‘bad white people.’ I encourage you to also take the time to replace ‘man’ with ‘straight’ or ‘cis’ or ‘able-bodied’ or ‘neurotypical’ etc etc.”

As usual, Gadsby was spot on about the inequality that persists when we allow even “good men” more space at the table than women, people of color, or anyone in the margins. Twitter was here for it:

We are not worthy of @Hannahgadsby
"I find good men talking about bad men incredibly irritating, and this is something the good men are doing a lot of at the moment,"https://t.co/yWfMjusvdA

Well, just when I didn't think I could adore @Hannahgadsby anymore, along she comes with this one – Jimmys of the world, pay attention. https://t.co/MAgqDUvjKi

This room of fancy folk is butter and @Hannahgadsby is a hot knife and i adore adore adore how uncomfortable she makes people and how true she is all the time https://t.co/fchGuisRkX

Gadsby’s Netflix stand-up show Nannette debuted in June and immediately became a hit because of her incisive commentary on straight white male privilege and abuse. May she continue to call out misogyny in the most brilliant and cutting ways.