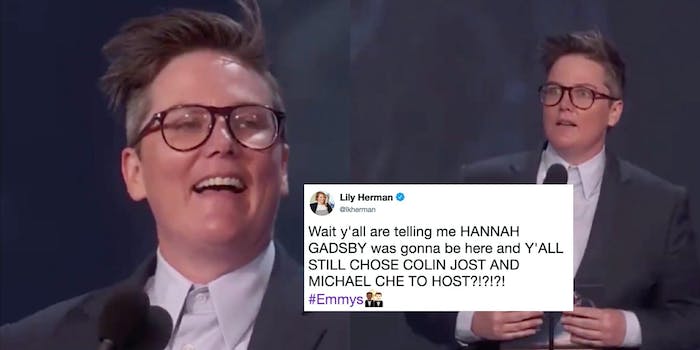 The internet would like her to host all things moving forward.

Australian comedian Hannah Gadsby’s short Emmys bit was so compelling, she should have just taken over Colin Jost’s and Michael Che’s hosting duties and sent the boys home.

At least, that seemed to be the internet’s mutually agreed upon decision after the Nanette powerhouse brought down the auditorium with a few jokes straight from her “Hashtag Not All Men, But a Lot of Them” playbook.

Presenting the award for Outstanding Director of a Drama Series, Gadsby’s shy charm shined in the spotlight as she spoke about the world going a bit crazy, allowing her, a “nobody from nowhere,” to present at the Emmys in a new suit and boots, just because she doesn’t like men.

“That’s a joke of course. Just a joke, fellas, calm down,” Gadsby fastly quips. “It is just jokes, but what are jokes these days? We don’t know. Nobody knows what jokes are, especially not men. Am I right, fellas? That’s why I’m presenting alone…”

It was a short but smart segment that showcased Gadsby’s ability to actually joke about this difficult reckoning we’re having with abusers in positions of power being exposed, and the discrimination women and minorities have long faced across multiple industries. For Emmys viewers who hadn’t seen Nanette, Gadsby’s comedy special released on Netflix this June, her short bit gave audiences a taste of her biting humor lodged between awkward acknowledgment and brutal honesty.

Her presentation touched on just a fraction of the trauma that she explores in the special, but just enough, and just subtly enough, to deliver that same script-flipping tone in a much tighter punch.

Audiences, unsurprisingly, were blown away at Gadsby’s short delivery, tweeting her praises and applause from home while the award show’s attendees ate her “Me, too”-adjacent jokes up.

the best part of the #Emmys2018 was @Hannahgadsby. i really didn’t know who she was prior to tonight, but i’m a fan now!

Emmy Award to Hannah Gadsby for this bit right now.

Many demanded that Gadsby be given the opportunity to host next year, and at every other award show, too.

congrats to hannah gadsby for hosting hopefully every award show ever

I can’t get enough Hannah Gadsby. She should have hosted. LetAnAussieHostEmmys2019 dot au https://t.co/ZEB8mEv3Fa

Or hell, they should have just let her take over hosting duties at that very moment. Did no one have a comically large push broom, or a gigantic hooked cane, to pull SNL‘s Che and Jost off the stage with?

Hannah Gadsby was on the stage for 45 seconds and that segment was better than anything from these hosts. #Emmys

Move to restart this telecast with Hannah Gadsby hosting? #Emmys