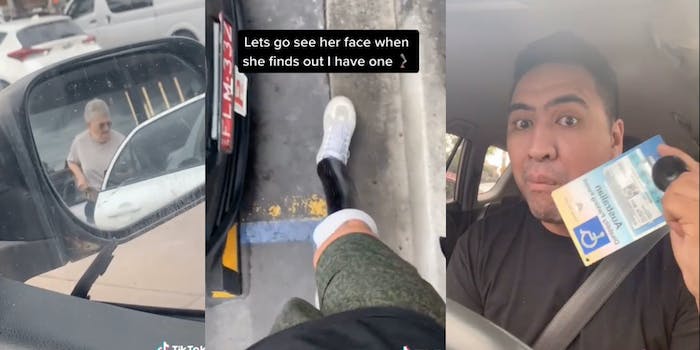 'Obviously you can't see my disability if I'm in the car,' he says before getting out of the car to confront her at McDonald's.

A TikTok user in Australia is expressing outrage online after a woman demanded to know whether he was permitted to park in a handicap spot. As it turns out, he only has one leg.

In footage uploaded on Saturday, TikTok user @pnuks recounted how the woman approached him to ask whether he actually owned the handicap placard in his vehicle while parked outside of a McDonald’s.

“Obviously you can’t see my disability if I’m in the car, so please tell me why this old lady thought it would be a great idea to approach me and knock on my window and demand to know whether this is mine or not?” he said.

But it didn’t end there. In a follow-up video, the TikTok user decides to confront the woman inside the McDonald’s and reveal his missing leg.

During the ensuing confrontation, the woman claims that she has a right to question anyone parked in a handicapped spot to ensure that they haven’t wrongfully taken it from her.

Returning to his vehicle, @pnuks goes on to state that he then asked McDonald’s to provide him with the surveillance footage of the woman approaching his vehicle.

McDonald’s reportedly informed him that they are unable to hand over any footage unless it is being requested by law enforcement.

The TikTok user says he drove to the police station in an attempt to file a police report. The police informed @pnuks that they were unable to offer any assistance, however, noting that the woman had not committed any crime.

Undeterred, the TikTok user is now calling on his followers to demand that McDonald’s Australia hand over the footage.

“This is why boomers suck,” he says. “Because for some reason old people are the only group of people that can be disabled people.”

But some users are questioning the TikTok user’s intentions and why he would need video of the encounter.

“I’m confused as to why you need the footage?” @angiepamje said. “It’s happened, you’ve reacted, we’ve learned from the lady’s mistakes. Time to move on.”

Others agreed with @pnuks though and recounted experiencing similar issues.

“This person deserves a right to make a complaint and have access to the footage,” @angiesimmonds argued. “What happened was wrong!”

While the TikTok user has yet to release an update, he suggested in his comments that he may attempt to speak to a lawyer next.