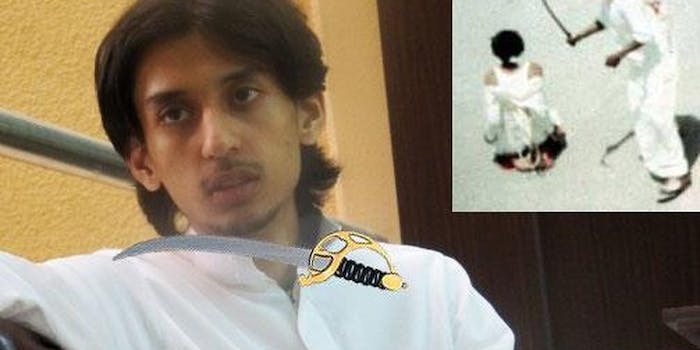 A Saudi Arabian writer has received death threats after he posted tweets about the prophet Muhammad.

Columnist Hamza Kashgari, 23, was detained by police Thursday at Kuala Lumpur International Airport while try to seek asylum in New Zealand after “he caused an uproar by posting material on his Twitter account detailing an imaginary conversation with the prophet in which he addressed him as an equal,” reported the Committee to Protect Journalists.

He was officially detained by police “for allegedly insulting Islam and the Prophet Mohammed,” reported Al Jazeera, the regional broadcast network. (Malaysia, where Kashgari was arrested, is an Islamic country like Saudi Arabia, with strict blasphemy laws.)

While the specific charges against Kashgari are unclear, Sheikh Nasser Al Omar has called for the journalist to be tried under the religious law of sharia, where blasphemy is punishable by death.

The tweets, which Kashgari has since deleted, caused outrage in Saudi Arabia, where conservatives have called for his arrest and execution despite calls for his release from Amnesty International and the CPJ , reported the New York Times.

Kashgari has also grabbed Twitter attention, where he’s been mentioned more than 1,500 times in the last 24 hours. While most of the tweets have have spread the news of Kashgari’s detainment, many others argue for his freedom.

On the other hand, a Facebook group titled “The Saudi People Demand the Execution of Hamza Kashgari” has collected more than 14,000 members who have altered images of Kashgari and praised his arrest.

“Peace, mercy and blessings of God: rejoiced at the arrest this heretic Hamza,” wrote Walid Khalidi on the group’s wall, according to a translation by Bing.