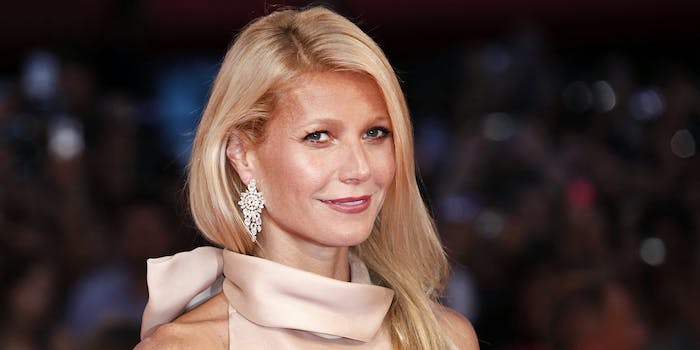 The event included guests who believe in a magical force called "the Field," and that using Advil is like "swallowing a hand grenade."

Gwyneth Paltrow just hosted a convention for her lifestyle brand, Goop, and while there wasn’t Kool-Aid to be had, the details of the scene are just as troubling.

The summit took place this weekend in Los Angeles, with Goop fans paying $500-$1,500 to get in. It included all the money-making gimmicks you’d expect from a celebrity lifestyle event—branded accessories, on-site makeovers, the infamous “vagina eggs“—but the guests are where things get really interesting. Los Angeles Times reporter Amy Kaufman quoted one panelist who straightforwardly advised the audience, “Don’t eat.”

“Don’t eat. I can’t stress that enough. We have the ability to store fat,” says Dr. Gundry, who doesn’t eat breakfast or lunch for 6 mos/yr.

Goop newsletters always include one or two guest articles or interviews, alongside the usual recipes and fashion recommendations. These articles range from plastic surgery advertorials to spiritual commentary, much of which is decidedly hokey. A typical example would be a “shamanic energy practioner” explaining how to dispell an “energy traffic jam” by burning sage.

This side of the Goop brand was out in full force at the summit. Here’s what New York Post reporter Maureen Callahan had to say about Dr. Habib Sadeghi, one of Paltrow’s favorite advisors.

In the day’s first lecture, Dr. Sadeghi spoke for nearly 90 minutes about “integrative photosynthesis,” “spiritual Wi-Fi,” “laterality to the body,” “neuro-vegetative signs” and “the ontological experience called your life.”

He spoke of June 4, 1997, the day Paltrow first reached out, as the most important of his entire life, moreso than his marriage or the birth of his two children.

Sadeghi described the summit as a “pilgrimage,” saying, “We are here to hold the light, the consciousness, for a different way of being.” Between lectures, Goop fans could hook themselves up to IV drips to combat dehydration, or have their picture taken by an “aura photographer.”

Later panels included the claim that Advil “is like swallowing a hand grenade,” a live facelift performed by a plastic surgeon, and an introduction to an invisible energy force called “the Field.” The Field came courtesy of therapists Dr. Phil Stutz and Barry Michels (unlicensed), who regularly write for Goop. Stutz characterized the Field as a force that can be manipulated by visualizing a goal (kind of like The Secret), but can be counteracted by something called “Part X,” which he described as “a devil living inside you, a demon.”

Callahan’s whole report is pretty wild, with one interesting caveat: The audience wasn’t wholly invested in the guest speakers. A lot of people walked out of Sadeghi’s lecture, and the crowd was most excited about Paltrow’s panel with celebrity guests Cameron Diaz, Nicole Richie, and Miranda Kerr. This suggests a divide between Paltrow’s more extreme interests, and what Goop’s audience actually wants: wellness products and aspirational advice from an A-lister.

Due to Goop’s nature as subscription newsletter, its content rarely reaches outside audiences. Jezebel loves to mock Paltrow’s out-of-touch advice, and the vagina eggs were an irresistible punchline across the internet, but that barely scratches the surface of Goop’s weirder side. And even if you subscribe, it’s easy to just scroll past an article by a psychic medium and check out the shampoo recommendations instead.

Reading descriptions of the summit, the word “cult” does spring to mind. But while Paltrow commands an impressive celebrity brand, she doesn’t come across as a cult leader. She’s more like a facilitator for con artists and snake-oil salesmen, simultaneously buying into their philosophies and promoting them to her million-plus subscribers. The question is whether that audience is fully onboard. Judging by the response at the summit, even the top-tier fans aren’t wholly comfortable with Paltrow’s more eccentric collaborators. They signed up for gluten-free recipes and a feeling of kinship with Paltrow’s brand, but that doesn’t necessarily translate to frog venom cancer treatments and psychic mediums.