Guy with testicular cancer is certain Reddit saved his life

Sometimes it pays to take advice from a user called _uniballer_.

Six days ago, a guy stumbled across a post on Reddit from someone named _uniballer_. And now he says that it may have saved his life, even if it did come at the cost of one testicle.

“I can tell my friends ‘Reddit saved my life,’” the man, who goes by the handle sharky143, wrote late Friday night.

Earlier in the week, he’d looked at a photo (NSFW) of a disembodied, bloody testicle (helpfully labelled with the warning “gross” by the forum’s moderators). It wasn’t posted entirely for shock value, however. In a comment,  _uniballer_ explained that he had the testicle removed after doctors discovered a cancerous growth.

“I’m 34. Median age for diagnosis is 33, which was surprising. My nut starting swelling about a month ago. After some research it looked like it could be some strange blockage or whatnot and probably not worth a trip to the doctor. Testicular cancer can be accompanied with lower back pain which I did not have. It was dumb not to go right away but it was a strange thing. My nut was getting bigger and harder but there was no pain associated with it. I learned later that no pain is actually a bad sign. If there was pain it was probably a torsion (twisting). After a month I decided to get seen and, after a fun ultrasound with a grandma, I was seeing a urologist. Then the next day I was in the O.R. and now I’m here. I’ve read that some guys will find small lumps on their nut and some have the swelling. My best advice is to not be stupid and get seen as soon as you suspect any issue.”

It turns out that advice was well taken by sharky143, who quickly made an appointment to see a doctor.

“I went in Tuesday to get my testicle checked and they did confirm that there was a mass in there and wanted an Ultrasound,” he wrote. “Wednesday, I went in, got the ultrasound, and an hour later got a call saying I have a very large mass in my testicle (Ultrasound picture here) and they wanted me to see a Urologist they next day! Thursday… got it confirmed that it is 95 [percent] cancer.” 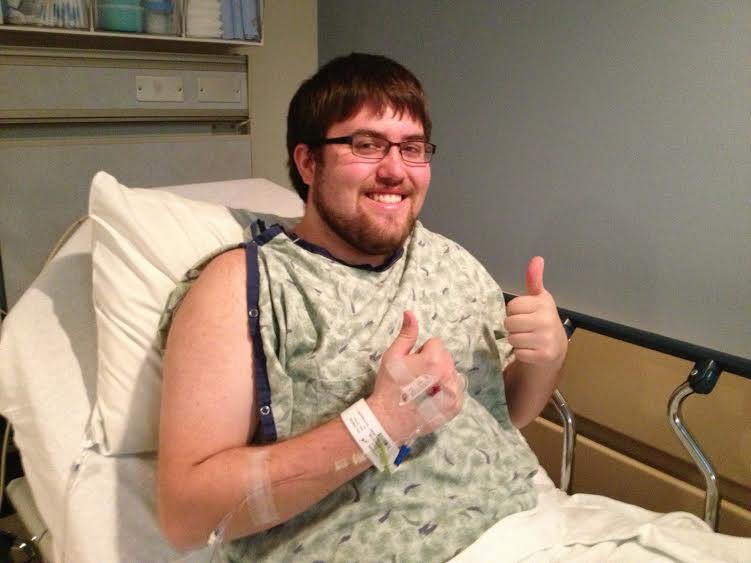 He said his second testical had a growth as well, but doctors want to learn more about the cancer in the one that was removed before they do anything more. Sharky143 gave _uniballer_ a shoutout in the title of the post, thanking him for bringing attention to the symptoms.

In the comments _uniballer_ responded, “Holy shit dude! I’m so happy to see your smiling beardo face and thumbs up with all the holes stuck in you.”

Photo by Army Medicine/Flickr (CC by 2.0)