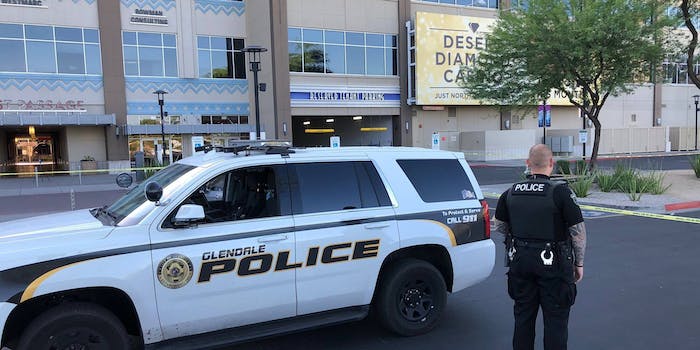 The shooter is in police custody.

A gunman shot three people in a shopping complex just outside of Phoenix on Wednesday night, leaving one in critical condition and two with injuries that were not life-threatening, Vice reports.

The gunman documented the incident in a Snapchat video and said, “Hello, I’m going to be the shooter of Westgate 2020.”

“This is to get back at mean society,” the gunman said. “So let’s get this done.”

The video shows the gunman wearing a camouflage face mask as he walks around Westgate Entertainment District with an unidentified rifle.

The gunman, who identifies himself in the video as Armando “Junior” Hernandez, walks around the shopping complex shooting his rifle. Near the end of the video, he walks up to a woman who is lying near her car and begging him not to shoot.

He responds to her pleas by saying, “Society is bullshit.”

“I have nothing to do with that,” the woman says. “You already shot me, dude.”

Officer Tiffany Ngalula of the Glendale Police Department told reporters that after locating the suspect, “officers challenged that suspect and were able to safely take that person into custody,” the New York Times reports.

Ngalula did not immediately respond to the Daily Dot’s request for comment.

Arizona state Sen. Martín Quezada wrote on Twitter that he was at Westgate during the shooting and saw two victims.

Although some versions of the video still circulate on the internet, many are urging people to not share the video.

Snapchat did not immediately respond to the Daily Dot’s request for comment.