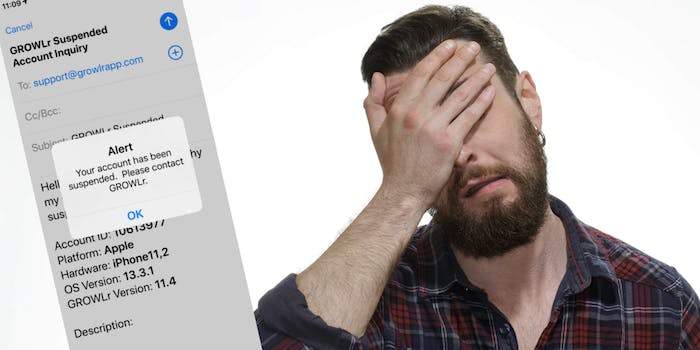 'The Growlr Apocalypse is upon us.'

What appears to be a glitch has caused most, if not all, Growlr accounts to be suspended.

The “bear social network,” as Growlr refers to itself, is a go-to for gay bears looking for love. Or company. But late Monday, the app appears to have suspended everyone’s accounts. Now those poor suspended souls are taking to Twitter to lament their situation.

Some users immediately jumped on the task of discovering what went wrong. The general consensus landed on bad management.

After the Growlr app was sold last year to tech company Meet Group, users were concerned. Particularly considering that Meet Group, which acquired the app in a $12 million deal, is run by straight people. Considering the app was originally made “by bears, for bears,” the change in ownership came as a surprise to many users.

Everyone else took the opportunity to poke fun at the situation—and the app—through memes. “When even GROWLr gives up on you finding guys,” one user joked.

For the uninitiated, bears are a part of gay culture. They tend to be larger and more masculine, and are usually hairy—thus the comparison. Slimmer “bears” are referred to as “otters,” younger bears can be called “cubs,” and bears with medium builds are often referred to as “wolves.”

Growlr caters to men of all sizes.

The tech company did not respond to the Daily Dot’s request for comment about the outage.