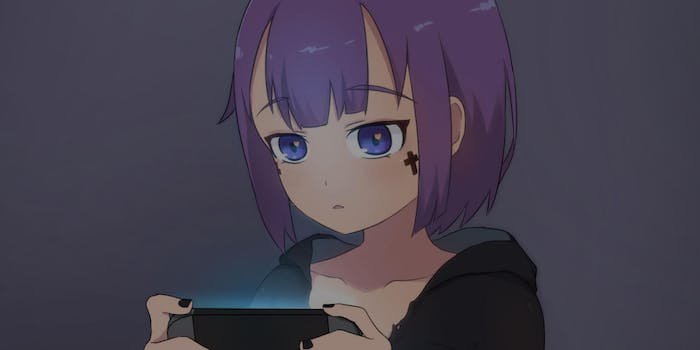 The Grim Reaper Who Reaped My Heart! starts innocently enough: Players go through a mysterious door in their house. The room hosts Vel, a Grim Reaper who will bring your life to an end. First, she wants to finish playing her video game. Then she’ll get on with her work.

Vel isn’t just a Grim Reaper. She’s an adorable grim reaper. The protagonist suddenly becomes ridiculously turned on by Vel and laments that he’s never had sex before. So, why not make a deal? You can probably see where this is going, and it involves an animated sex scene with a voiceover by adult voice actress Pixie Willow,

“Whether that’s emotionally or sexually is up to you (*ゝω・),” Kamuo wrote on the game’s itch.io page. “I [will] be releasing new updates with one new sex scene each. A total of five is currently planned.”

His popularity has followed him to itch.io, where The Grim Reaper Who Reaped My Heart! earned nearly 10,000 views and around 3,000 downloads. Players’ responses, he said, have largely been positive. “I think there’s less people who viewed or who are even interested about it compared to my fan animations, but the people who like it really love it,” Kamuo told the Daily Dot.

Kamuo plans to cover a “bigger story” once the game is done, so a “sequel or what-not” with Vel is on the table. Expect more visual novels outside of Vel, too. “Generally I want to do weird ones,” Kamuo said. “I actually like horror/Halloween settings. I think this one is pretty dark too considering Vel is a Grim Reaper.”

Players can enjoy two versions of The Grim Reaper Who Reaped My Heart!  There’s a public, censored edition and a Patreon-only, uncensored edition. The former is free with a pay-what-you-want model, while the uncensored version comes with a $5 monthly pledge to Kamuo’s 18+ games Patreon. Each month, one new sex scene will be added to the game.

This isn’t Kamuo’s first 18+ game. Last month, Kamuo teamed up with HotPink Games Circle to create pixel art for Lewd City Girls. The game, which parodies beat-’em-up, side-scroller River City Girls, lets players beat up or beat off their foes. In true 18+ fashion, players become more powerful in the game as they lose clothes. (Kamuo confirmed to the Daily Dot that all characters within the game are adults.)

“I think it’s to be expected considering my visual novel is an original idea and it’s not done yet,” he said. “It’s gonna get more attention when I keep adding on it and when it’s eventually done, most likely.”