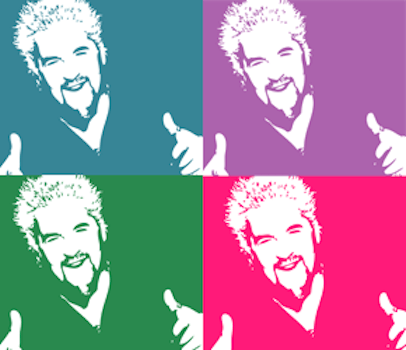 PETE WELLS, did you intend to turn your New York Times review of Guy Fieri’s new restaurant into a viral hit?

I think you did. I think you knew exactly what you were doing when you decided to write the review in the first place. I think you chose to write your review in the Socratic style of rhetorical questioning because you wanted to teach Guy Fieri and all of the residents of Flavor Town a lesson. I think you succeeded. Guy Fieri has since tried to defend himself, but the damage is already done and his defense seems to be as faulty as his Donkey Sauce: “Let’s see where we are in six months,” he said on Today, insinuating that no restaurant could possibly be functional without accepting customer cash for inferior quality first. Does it surprise me that a critic took aim at a too-big restaurant helmed by a TV personality who freely admits that it wasn’t ready for prime time? No. What surprises me is that anyone cared. How did a restaurant review go viral?

Now, the shoe’s on the other foot. We’re laughing at the send-up of a man cooking for the exact same crowd that would patronize an Olive Garden. Except behind the jokes, there’s some real, and pointed, derision. There’s nothing earnest about Pete Wells’ review. The whole thing from start to finish is tongue-in-cheek. It’s true, there are some gems, like “Did you discern any buttermilk or brine in the white meat, or did you think it tasted like chewy air?” But why are we okay going from laughing at the critic to laughing with the critic?

Perhaps it’s because Guy Fieri is a TV personality with the credentials of an Internet celebrity. He’s essentially a human marketing stunt, right down to having a signature look that can easily be replicated for Halloween. He rose to fame because he won a reality show and he became a household name because he was on TV. Hell, he’s such a man of the people, his name is Guy. I assume he has brothers named Bro, Duder, and Pal.

In the bowels of the Internet, the loudest, most obnoxious wheel gets the grease, and Fieri happens to be the greasiest dude on food TV. Ultimately I think this is what Wells was responding to when he wrote the review. He took a break from considering the worthiness of chefs pouring everything they have into creating a sublime dining experience and went after Guy, who is considerably more successful than most chefs and restaurateurs because he happens to be on TV.

This wasn’t a review of food. It was a one-man referendum on our celebrity food culture that’s driven more by what’s said on the airwaves than what’s on the plate. It was a serious critic using his serious platform to dress down a chef he saw as neither worthy of the attention he gets nor worthy of serious criticism. When you really think about the whole thing, it’s essentially a flame war.

Oddly enough, the review itself has turned Pete Wells into a minor internet celebrity. As of right now, he’s essentially the Guy Fieri of food critics. I’m willing to assume that most people who have enjoyed the New York Times review have never heard of Sam Sifton or Frank Bruni. Have you? They’re Wells’ predecessors and they carry just as much weight in the food world.

The difference is that they didn’t write reviews tailor-made for the Internet age. If they wrote a scathing review like this, it would be shared in kitchens all over the country and read by almost nobody else. Critics, by and large, have traditionally done everything they can to avoid the spotlight at all costs. Disguises, fake names, and all manner of evasive techniques were employed to preserve anonymity, but those days are over. Even if we don’t know what Wells looks like, people who have never opened the New York Times Dining Section a day in their lives now know his name. I think that was the intended result of the review. I think the critic got tired of the chef getting all the attention and wanted some of the glory for himself. I think Pete felt left out.

PETE WELLS, do you feel better now that you took down a restaurant that neither wants nor deserves criticism? If so, I know an Olive Garden in Grand Forks, North Dakota that you should visit.

Jason Kessler is a food and travel writer based in Los Angeles. He writes The Nitpicker column online for Bon Appetit and is a frequent contributor to Food Republic, Sunset Magazine, Organic Spa and many other publications. If you’re not careful, he’ll empty out your refrigerator. Follow him @thehungryclown.
Art by Fernando Alphonso III