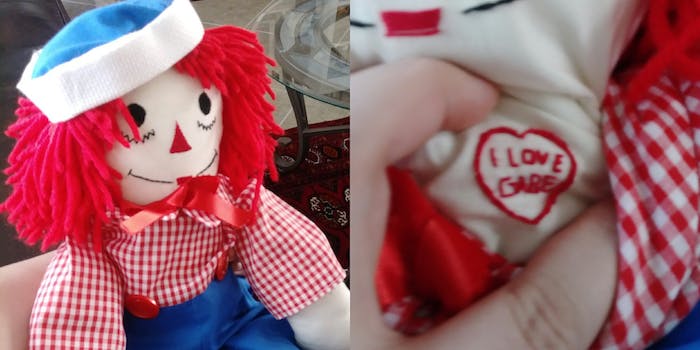 This may be one of the sweetest Christmas presents of all time.

A young trans man re-received a doll he was given as a baby for Christmas, and his grandma’s update to it is beyond sweet.

The holidays can be a hard time of year for many transgender folks. Many trans people are rejected by family, or have family who refuse to acknowledge and respect their gender identity. But times are changing, and transgender acceptance is growing. Many people got to go home this year to love and support. This year, one grandmother went the extra mile to show her trans grandson how much she loves him.

“So when I was a kid I, I had a Raggedy Ann doll given to me by my grandmother. It had my birth name embroidered into a heart on its chest,” wrote Gabe, 22, on Twitter.

His grandmother had borrowed that childhood doll, and on Christmas morning, Gabe found out why. When he unwrapped his presents he found his childhood doll, with new bright blue pants, a shorter haircut, and most importantly, new words embroidered into the heart on his chest: “I love Gabe.” His Raggedy Ann was now a Raggedy Andy. “Hes trans, like me,” Gabe said on Twitter.

So when I was a kid I, I had a raggedy Ann doll given to me by my grandmother. It had my birth name embroidered into a heart on it's chest.

This Christmas my Grandmother borrowed it and gave it back, now with pants, shorter hair, and my new name sewn in place. Hes trans, like me pic.twitter.com/KpMAnd1In8

Grandparents being loving and sweet can make anyone smile, but the gesture of transitioning Gabe’s childhood doll was so touching it got the internet crying.

Gabe’s grandma got him a few gifts besides the Raggedy Andy this year that celebrate his name, including an engraved pocket knife, and a T-shirt that says, “I’m Gabe doing Gabe things.”

Other name-based gifts I got from my grandmother include: an engraved pocketknife, and this sick t-shirt I'm never taking off pic.twitter.com/Hy4wZBNyZK

Gabe has dubbed the doll “raggedy transdy,” and hopefully he and his grandma have given a bunch of parents and grandparents of trans folks a great idea for a touching Christmas gift for 2019.

The Daily Dot has reached out to Gabe for comment and will update this story if he responds.