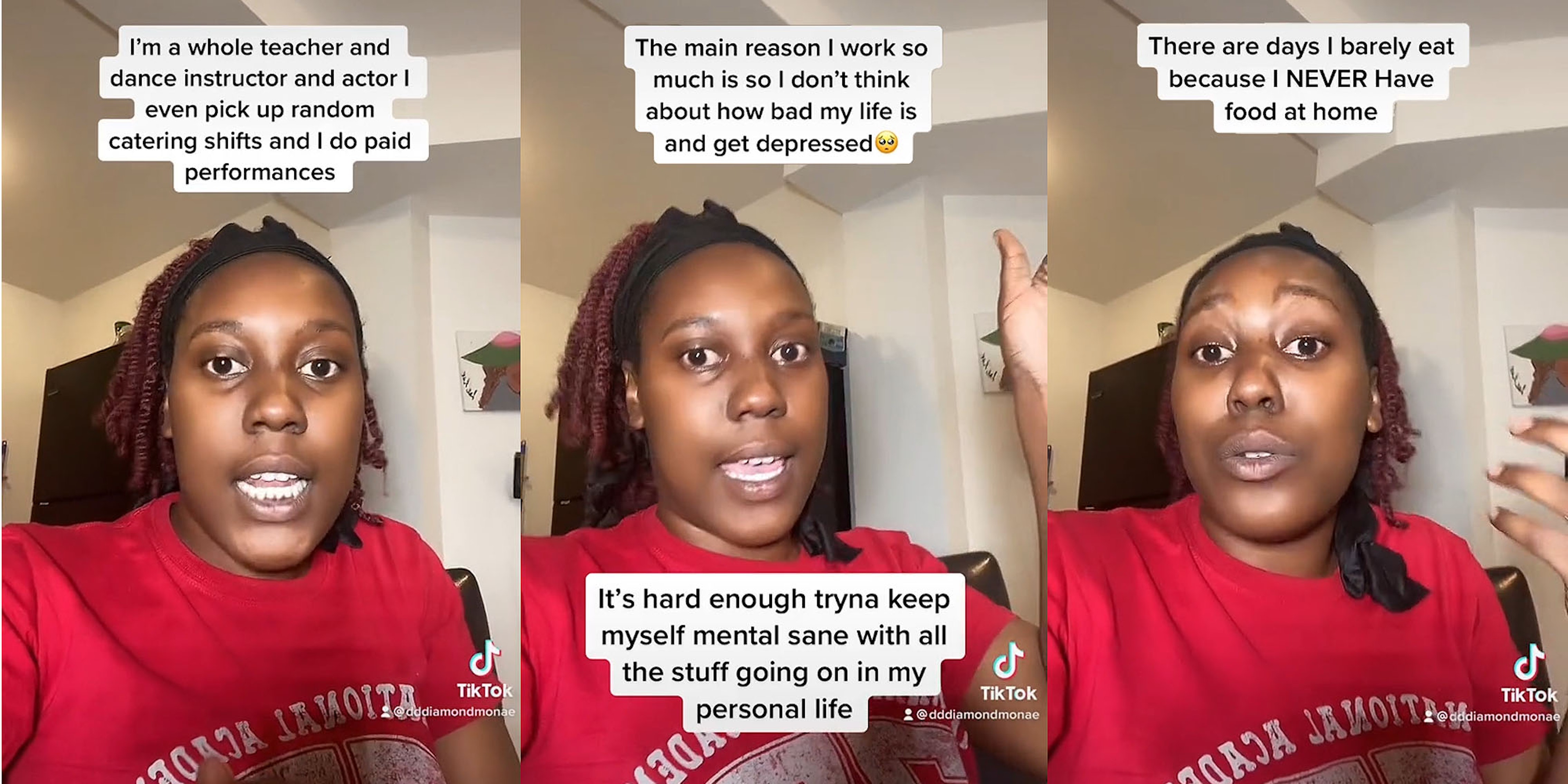 ‘I work as much as I can’: TikToker’s video about the inaccessibility of government assistance for single people sparks debate

'It's really set up for you to lose.'

The cost of living in the United States has skyrocketed due to a perfect storm of global business wealth redistribution influenced by COVID-19 sanctions, inflation, and a rising cost of property ownership and renting/leasing rates.

It was easier to purchase a home during the Great Depression than it is in 2022. The Biden administration’s series of misjudgments also failed to curtail the rate of inflation, which is outpacing the average salary increases many retailers are implementing in order to end the “labor shortage” that occurred in the pandemic’s wake.

A growing number of Americans require side hustles, not to have savings, but to ensure that they’re able to pay their bills and just stay afloat. In fact, 64% of U.S. citizens have reported that they are living paycheck to paycheck, and missing out on a single pay period will set them back financially, requiring that they either acquire more work or take out a loan to maintain their current standard of living.

And that “standard of living” isn’t one of luxury and excess, but rather one that just covers the basics of a place to live, food to eat, and bills to pay—something that a TikToker (user @dddiamondmonae) expressed in an emotional clip that’s going viral on the social media platform.

In a caption for the post she writes, “Thanks for letting me vent,” and a text overlay reads: “I totally understand why ppl unalive themselves this is so fucking pointless.”

In her video, the creator shares her frustration with the lack of financial assistance available to her.

She continues to say that, on top of working a job (or several, as she does) that can barely make the bills, dealing with depression and anxiety can make things even more difficult.

“I try so hard, I try so hard to stay positive…like so fucking hard,” she continues. “I do so much, I give my all, I work as much as I can. Several jobs. And I try to pay my bills on time every fucking time but I can’t.”

The TikToker urges that despite the large amount of hours she works, she still struggles to afford basic necessities. “For some reason, I can never stay ahead,” she says. “It’s always something not getting paid and something getting messed up because I can only do so much.”

She claims that she’s applied for government assistance multiple times for a variety of programs, including those that help with electricity bills and public transportation costs. However, she claims she’s been denied every time, believing that it’s because she’s a single woman.

“Bro, I’ve been denied for every one,” she says. “Every time. And I know it’s because I’m a single woman with nothing else. No kids, no disability, no navy, no army, none of that shit behind me.”

The TikToker shares that she doesn’t know what else she can do to gain some financial stability.

Her video received over 100,000 views, and other people added their own frustrations in the comments.

“I’ve been there. It’s like they punished us for making different choices,” one viewer wrote.

“Girl you are not alone! I have 3 jobs and I honestly feel like I just get by every month. It’s frustrating and I’m sorry boo,” another added.

“You are not alone. There is NO HELP,” a third said.

However, several parents countered her argument that assistance was out of reach because she is single and without kids.

“Bruhhhhhhh! I have five kids, but because I make $200 over the allowed amount I don’t qualify for anything! So I hustle by braiding!” one viewer commented.

“I have two kids no help. I make ‘too much’ they’re using an income chart from the 90’s,” another chimed in.

One user argued that most low-income adults need to have a partner, because the cost of living is too much to afford on a single wage. “It’s setup to where you have to love with someone to share bills cause the wages they paying aren’t enough,” they said.

Statistically speaking, many people are echoing @dddiamondmonae’s sentiments. Studies indicate that only 19% of Americans believe they are earning enough money despite the amount that they work.

With the rate at which the economy is going, many believe that the United States is headed towards another recession.

That hasn’t stopped folks from wondering, however, what the real cause of such great income disparity is? Many research analysts have pointed to corporate lobbyists fattening the wallets of government leaders and their own private interests as the primary cause of massive gaps in wealth, the destruction of a middle class, and the increased difficulty in citizens’ being able to become home owners.

Others have also called it unfair that banking corporations and major businesses like airlines get to use private citizens’ tax dollars for bailouts, while financial assistance programs, student loan forgiveness, and/or universal healthcare gets left by the wayside. Airlines, for instance, in the wake of the COVID-19 pandemic played fast and loose with their finances in stock buyback programs, only to have their profits decimated by the pandemic. They were given a lifeline thanks to funds from the Federal Government collected by taxpayers.

Corporations have been criticized for not paying their “fair share” of taxes for years, with many major American companies off-shoring many of their processes overseas in countries like Ireland to avoid paying stateside tax rates.

The Daily Dot reached out to @dddiamondmonae for further comment on TikTok.