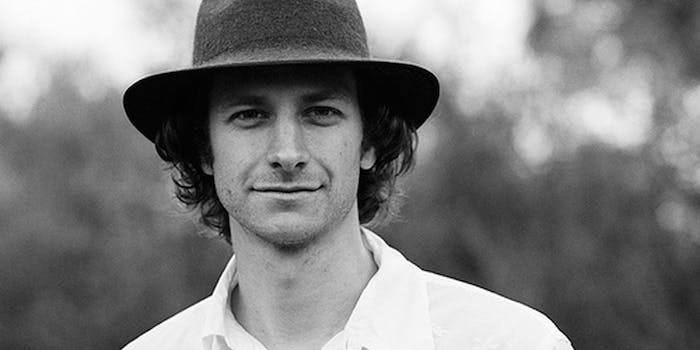 The Australian pop sensation talks to the Daily Dot about losing control of his own song and breaking through the glass ceiling of YouTube.

YouTube finally hijacked the pop charts in 2012. Karmin landed on the cover of Rolling Stone. Carly Rae Jepsen landed a no. 1 single. Lana Del Rey catapulted straight to Saturday Night Live. And South Korean rapper Psy got everyone with an Internet connection and a decent sense of humor going “Gangnam Style.”

After a decade of struggle, his breakthrough single with Kimbra, “Somebody That I Used to Know,” landed as forcefully as debate season. He gained international ubiquity on YouTube, registering more than 330 million views on YouTube and leaving countless parody and tribute videos in its wake. The video turned the eccentric Australian pop romantic into an international star, while his third album Making Mirrors (Universal)—an intriguing combination of Peter Gabriel’s stylized drama, the weird pop eccentricities of ‘60s psych nuggets, and DJ Shadow’s warped sampling—has gone platinum several times over.

As he made his way through Texas on the final leg of his current U.S. tour, the Daily Dot spoke with Goyte about losing control of his own song and breaking through the glass ceiling of YouTube.

Daily Dot: How relieved were you when “Gangnam Style” took off on YouTube?

[Laughs] Finally something else for people to fixate on! I actually wasn’t aware until about a week ago that it was that big. I heard it about a month ago and thought that it was a great track. We played a festival in Seoul, [South] Korea, and we just missed out on seeing Psy due to a guerilla gig at the Gangnam train station. I saw him at the MTV Awards and thought that he was crossing over, but I had no idea it was smashing through hundreds of millions of views in two months online. It’s just massive.

DD: I like the way that you responded to your viral success—to create a montage of all the different parodies out there. It was a personal tribute, but it all also seemed like you were trying to close that chapter.

I hoped that it would tie a few things together. I was a bit unsure. As much as it’s awesome to have so much material to draw on, it really played perfectly into the way that I’ve made music over the years—amassing large amounts of sound, chopping them up, and manipulating them into collages. I was still uncertain when I started if I had material that would allow for a variety of tones to come across and different levels of commentary, but I’m pretty happy with what transpired.

In that six minutes, it just about covers all of my feelings about the song and what’s happened to it—some really poignant things and beautiful moments and some absolutely absurd, hilariously shit moments and a lot of stuff in between. It was also a genuine thank you to all of the people who, in some cases, spent an incredible amount of time parodying the artwork. It takes a long time to paint a wall and yourself.

DD: What was that process like of seeing how much was out there and trying to make sense of it all?

It was mainly a bunch of fun. I did some research to try to get the best resolution and sound that I could for all of the videos. I created some spreadsheets, because I needed a system to keep track of whose video was whose and what part I was interested in using. I had a friend teach me how to use After Effects in Adobe.

It had the same spark as when I was about 21 years old, when I started just digging into records and sampling them and realizing how rich it was, this thing that you can do using software to manipulate analog sources. For me mainly, it really felt like I was painting with all of these sounds and videos. I was getting lost in it.

DD: In that sense, it sounds really comparable to your songwriting process in general.

Definitely. As a mashup, it touched back on a way that I used to sample in way that I haven’t done in a while, the more instrumental hip-hop stuff in the vein of DJ Shadow and Cut Chemist, with more spoken word guidance through it. I’m a big fan of the cut-and-paste songwriting, and it was kind of fun to put the big hit single back together with that.

DD: Was there a tribute video in particular that stood out to you?

I can’t say I revisit them that much. There were certainly some I found more engaging than others. The Walk Off the Earth cover version is very strong. It’s no surprise to me why people were so engaged by that. There was such a wealth of people responding to it and then parodying it.

Mike Dawes, who I’m actually going to meet in London soon and whose in the middle of the mashup, did a really beautiful acoustic guitar arrangement. I found the instrumental versions to be the most interesting, because they give you insight into how your chords and your harmonies work. It gives you a chance to reflect on it.

DD: In a sense, you lost ownership of that song. It no longer belonged to you. It belonged to the Internet. What did that feel like?

I’m OK with it now. I’m past the stages of feeling confronted by that. There were little moments of wanting to control it and avoid the stuff I don’t like. “Can you give me the aspect of my work back?”

But I’ve gotten over that. Now I just celebrate the myriad responses and sometimes the peculiar things that happen when a piece that you made enters the mainstream pop culture. I’ve found it fascinating. The mashup was a way to kind of re-enter the conversation.

DD: You’re in a unique position in that you had an outstanding body of work before that song’s viral success. But for most artists, YouTube seems to create a glass ceiling, creating expectation before they’ve had a chance to really develop.

I don’t think it’s an issue. It’s not something that’s unique to the Internet. If someone has some great success early into their career, that can be a challenge or a hurdle to get over, whether it’s affecting how you write material or if it just creates an unrealistic expectation or puts you in a position you realize you’re not comfortable in.

DD: But with the nature of YouTube, where anyone can have one viral video, you don’t think that might magnify that issue for new artists?

I think there’s a great power in how people naturally gravitate towards something and gets people talking and sharing. Things tend to distinguish themselves. But it depends on how you measure success or what you desire from it all. I didn’t make music with the intention of getting a certain number of YouTube hits. I kind of think some of the older things I’ve done, that I think is the least accessible to a broad audience, is the best stuff that I’ve done and is the stuff that I should perhaps follow-up on and explore more fully. I’m aware that that will likely not lead to more YouTube success, but that’s not the end goal.

I don’t really know what the end goal is, but I know that’s not it.

DD: As someone with a strong visual background, are you excited to have an avenue like YouTube moving forward?

I am. I like treating YouTube like a free art space. I hope to just keep putting as much stuff up there as I can. I’m not into the commercialization of the Vevo channel. It just seems really impersonal to me that when you bring up a video on a Vevo channel, you get someone else’s face around the video and really intrusive in-video advertising. So I’ve avoided the annoying ads. I just want a digital space where people can come to it if they want.

DD: What’s next for you? Have you started on the next record?

I’m looking to start next year. I want to start with a blank slate. I don’t if I’m holding off on writing new stuff because I feel like I’ll start repeating myself or my process if I work on a laptop while I’m on the road. But part of it is that I’ve been genuinely enjoying the process of touring and really doing it for the first time where I have a sort of balance and routine. I’m enjoying the experience of being on and off stage, traveling, and being in a new city every day. I haven’t wanted to muddy the water by pinching a half-hour here trying to work on a new chord progression here or half-starting a song that doesn’t really go anywhere.

I’m thinking about taking some time off too, maybe even a few months, not listening to music at all or even trying to write—just doing some traveling around the world and revisiting some of the people I’ve met over the last year. And starting from scratch there. It’s been a lot to take in.