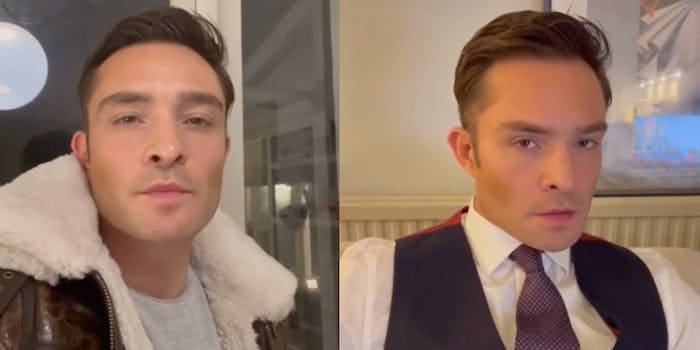 Ed Westwick, the U.K. actor known for his starring role in Gossip Girl, is seemingly trying to make a comeback through TikTok. But his debut on the app was shadowed by reminders of sexual assault allegations made against him in 2018.

Westwick, who played Chuck Bass in Gossip Girl, posted a video on TikTok on Monday that has since been viewed at least 4 million times.

In the description of the video, he urged his followers to use the hashtag #StitchEd hashtag in their videos responding to his prompt.

“I’ll be reacting to some of my favorites,” wrote the actor, who is currently promoting his upcoming film Me, You, Madness.

Following the TikTok videos, people on Twitter reminded followers—and the actor himself—about allegations of sexual assault made against him three years ago.

Three women accused Westwick of sexual assault in 2018 on the heels of the Me Too movement on social media. One woman, Kristina Cohen, wrote in a Facebook post in November 2017 that Westwick raped her in his home in 2014.

“I told him to stop, but he was strong,” Cohen wrote in the Facebook post at the time. “I fought him off as hard as I could but he grabbed my face in his hands, shaking me, telling me he wanted to fuck me.”

Westwick denied the allegations, and Los Angeles County District Attorney’s Office declined to press charges against him in July 2018, according to BuzzFeed News.

On Tuesday, however, Twitter users criticized his fans and issued reminders about the previous allegations. “Y’all gonna forget his sexual assaults just like that……?” one user wrote.