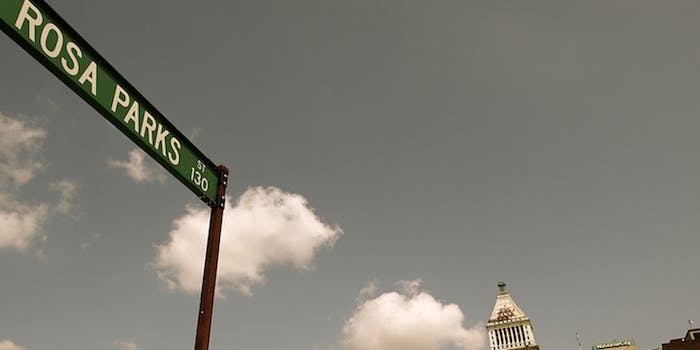 The GOP's homage to Rosa Parks backfired, and the Internet seized the moment.

Sunday marks the 58th anniversary of Rosa Parks’s historic refusal to move to the back of the bus in Montgomery, Ala., and across social media, people have been celebrating her.

Yes, racism ended back in 1955, in case you haven’t noticed. The incautious choice of words initiated many jokes aimed at the GOP’s ignorance.

“@GOP: Today we remember Rosa Parks’ bold stand and her role in ending racism.” RACISM IS OVER?! *ENTERS BASS PRO SHOP TO SEE IF IT’S TRUE*

And then the issue snowballed on Twitter, after @FeministaJones created the hashtag #RacismEndedWhen as a “satirical, subversive response to the GOP suggesting Rosa Park ended it”:

#RacismEndedWhen Laura Schlessinger schooled a black lady over how the n-word wasn’t really offensive by saying it over and over and over.

#RacismEndedWhen black was in vogue and colorblind was a term of endearment.

#RacismEndedWhen kids bullied a 12yo black girl over her natural hair, & her school threatened to expel her. https://t.co/O5Ymiqm1cu

Three hours later, the GOP finally addressed the tweet, which was intended to reflect a longer, more accurate message on their site.