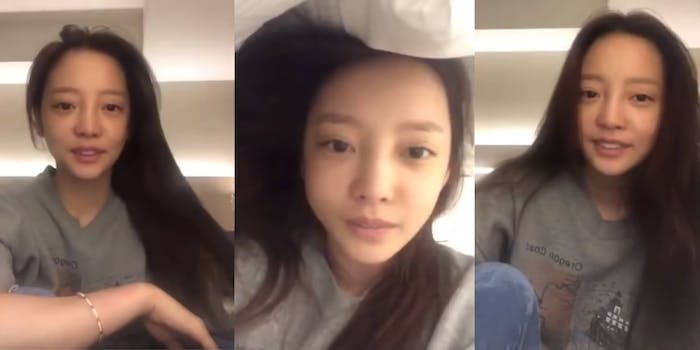 The 28-year-old star, whose real name is Goo Ha-ra, was a former member of the girl group Kara. Hara was part of the five-part female group from 2008 through 2015. After splitting from the group, Hara pursued a successful solo career, which included the release of her Japanese single “Midnight Queen” on Nov. 13. Hara’s tragic death is the latest in a concerning string of deceased young K-pop idols.

Police have not yet released an official cause of death. Due to a suicide attempt by Hara in March of this year, however, many people are speculating that the young star took her own life. Her earlier suicide attempt came after an ex-boyfriend attempted to blackmail her using threats of violence, as well as the release of a sex tape. After the turmoil surrounding the blackmail and her suicide attempt, Hara’s agency terminated her contract.

A few months later, in June, Hara signed on with Japanese talent agency Production Ogi. Her new agency assisted Hara in appearing in several television and fashion shows in Japan, where she was very popular. Hara’s death comes less than two months after her close friend Sulli, also a popular K-pop star, died by suicide. Sulli died in early October, after participating in an ongoing campaign against cyberbullying. She was 25. Her death, along with Hara’s, shines a spotlight on the concerning number of deaths in the K-pop industry.

Since news of Hara’s death came to light, fans of the young star have taken to the web to voice their anguish. “She let the world know she was struggling and was ignored,” one commenter said. “She deserved so much better.”

Fans are also mourning the loss on her last Instagram post, which was posted on Saturday night and reads, “goodnight” (translated from Korean).

“I’m sorry for everything that happened to you, you deserved so much more and so much better. I love you. Goodbye,” one fan wrote.

It was devastating to wake up and find out through a tweet that this vibrant woman has left the world. I hope you're all doing well today. Every day you are here, you are worthwhile.
If you need anyone to speak to, I am here, and so are others. https://t.co/Es5cwvzoIy

wow. rest in peace goo hara. 2019 continues to be the most devastating year. feels like we keep having the same conversation about mental health after something like this happens, and then everyone forgets about it. but it's important that we always keep the conversation going. https://t.co/uT0HcVE8sT

rest easy goo hara, we will always remember you as the talented beautiful woman you’ve always been pic.twitter.com/WLwtPI4p2M

For those that didn't already love you, you made your way into our hearts through Invincible Youth. Your dorky personality and bright smile was contagious. we will miss you dearly. RIP Goo Hara pic.twitter.com/8WHQXMCWdS

Variety reports that K-pop has seen a string of deaths among its most popular stars since the late 1990s. Many have died by suicide, often after painting a harrowing picture of the troubling industry that pushed them to the brink. Too often, K-pop stars suffer from depression. This struggle is regularly a result of toxicity online, as well as the highly problematic K-pop industry.

A representative from Hara’s talent agency, Production Ogi, told AllKPop that it plans to hold a private funeral for Hara. “There is currently nothing that we can say right now, but we have plans to hold her funeral privately,” the representative said. “However, we must also consult Goo Hara’s parents and the bereaved family.”