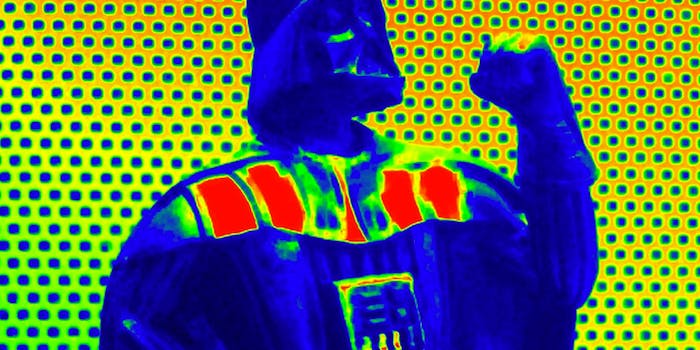 So what if some guy quit Goldman Sachs? Can he top Darth Vader?

An indicting op-ed of Goldman Sachs’ company culture in the New York Times, written by a firm executive on his last day of work, went viral early Wednesday morning.

The article has caused Goldman Sachs to trend on Twitter for the first time, according to Business Insider.

Greg Smith, the head of the firm’s United States equity derivatives business in Europe, the Middle East, and Africa, harshly criticized an alleged change in the investment giant’s culture that he says has become “toxic and destructive.”

Both Greg Smith and Goldman Sachs were trending on Twitter this morning. They had over 10,000 and 63,000 mentions, respectively, over the course of the day, according to Topsy.

The rest of the Internet was quick to react to the op-ed with support, criticism, and parodies.

The Daily Mash delivered a similar op-ed written by Darth Vader, who has resigned in the same manner from the Evil Empire of the Star Wars universe.

“I believe I have worked here long enough to understand the trajectory of its culture, its people and its massive, genocidal space machines. I can honestly say that the environment now is as toxic and destructive as I have ever seen it.”

Comedian Andy Borowitz wrote a response addressed to the original op-ed under the name of Lloyd Blankfein, the firm’s current CEO and Chairman. The rebuttal attempted to allay clients’ fears by stating that Jospeh Kony, the head of a Ugandan guerrilla group and the subject of a recent Internet campaign, would replace Smith.

“For those unfamiliar with Mr. Kony’s resume,” the parody reads, “let me assure you that he has the character and moral standards you have come to expect from Goldman, and like the rest of us here at the bank, he has dedicated his life to doing the Lord’s work.”

A Washington Post parody entitled “Why I am Joining Goldman Sachs” implored the firm to hire its writer:

“Goldman, I have long dreamed of quitting the hurly-burly of my present trade to lead a quiet life in tune with money. Preferably other people’s money. I think we’d be a perfect fit.”

We wait with impatience for Goldman Sachs’ response.