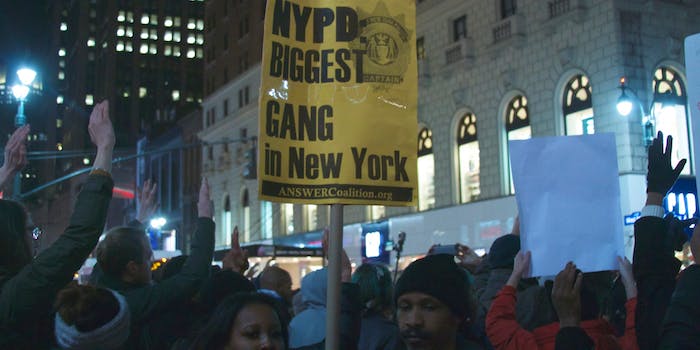 A GoFundMe for Eric Garner’s killer has raised more than $70,000

Daniel Pantaleo was fired five years after putting Eric Garner in a chokehold and causing his death.

A GoFundMe campaign is raising money for the “family help fund” of Daniel Pantaleo, the New York Police Department officer who was fired on Monday, five years after putting Eric Garner in a chokehold and causing his death.

The GoFundMe page had raised more than $70,000 of its $150,000 goal by Tuesday afternoon, with the amount donated increasing by thousands within minutes. According to the information on the page, the account was set up by user R Trois and has been raising money for a little over two weeks.

Pantaleo, a now-former officer with NYPD, was initially allowed to remain on the force and was not indicted for the 2014 killing of Garner, a Black man, in Staten Island. A video showing Pantaleo putting Garner in a chokehold as he screamed “I can’t breathe” went viral in the aftermath, the phrase becoming one of the most prominent slogans of the Black Lives Matter movement.

Commissioner James P. O’Neill on Monday dismissed Pantaleo from the force, rendering him disqualified for pension, two weeks after a police administrative judge recommended he be fired.

Activists on Tuesday called on others to report the GoFundMe page.

Poet and activist DiDi Delgado on Monday predicted a GoFundMe would be set up by Tuesday. She wasn’t the only one.

“I’m asking everyone to report the go fund me,” Delgado wrote within an hour of sharing her prediction. Others expressed solidarity and shared advice on the post on her Facebook page, where she has more than 12,000 followers.

“I am so triggered and sickened by this. Murder a black man, get sympathy and reward?” one person wrote. “Each and every person donating will get what’s coming to them. That’s fact.”

Here's the link. Flag it! This cop was allowed to collect a paycheck for over 5 years after killing #EricGarner. He doesn't need anymore money for being a murderer. https://t.co/fy7fN1fDtD

Have the CEO and Comms at GoFundMe @robsolomon1 @ajanwheeler seen the platform being used to fundraise for NYPD's Panteleo, who was just fired for killing #EricGarner?https://t.co/ogBySZboyL

On its face, the GoFundMe page for Pantaleo doesn’t appear out of the ordinary, but the officer’s actions have become crucial in the conversation on police brutality. His actions are reflective of a system that results in police officers using brute force disproportionately on people of color, especially Black people.

It’s not clear if a mass reporting would bring down the page. According to GoFundMe’s terms, campaigns deemed by the platform “to be in support of, or for the legal defense of alleged crimes associated with hate, violence, harassment, bullying, discrimination, terrorism, or intolerance of any kind relating to race, ethnicity, national origin, religious affiliation, sexual orientation, sex, gender or gender identity, or serious disabilities or diseases,” are prohibited.

In April, GoFundMe removed a campaign by the United Constitutional Patriots, a border militia group that was detaining migrants along the U.S.-Mexico border.

The Daily Dot has reached out to GoFundMe and will update the report with the company’s response.