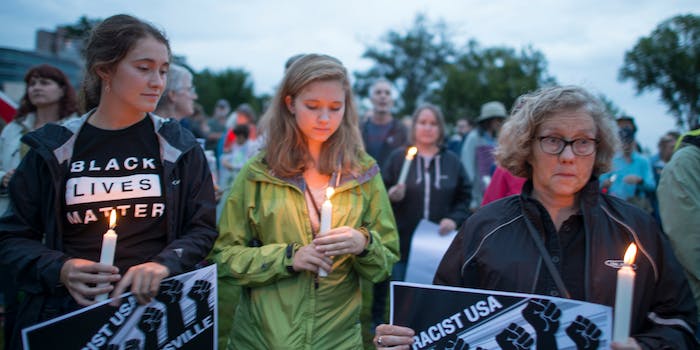 Nearly $1 million raised so far for Charlottesville victims on GoFundMe

Here's how to donate.

More than $800,000 has been raised for medical expenses of victims injured in the violent clashes between white supremacists and counterprotesters during last weekend’s deadly “Unite the Right” rally in Charlottesville, Virginia.

According to the Washington Post, CEO Rob Solomon says they’ve legitimized the campaigns raising money for Charlottesville victims, while shutting down campaigns for James Alex Fields Jr., the man police say drove a car into counterprotesters, killing Heather Heyer and injuring 19 others.

One campaign for Tyler Magill, a University of Virginia employee and DJ, has raised more than $116,000 for medical costs associated with a stroke he suffered as a result of being attacked by white supremacists during Friday night’s torchlight rally on the campus.

More than $158,000 has been raised for Dre Harris, who was video recorded and photographed being attacked by white supremacists during Saturday’s rally. Because his injuries were too severe to be treated by on-site medics, he was transported to Martha Jefferson Hospital and diagnosed with a concussion, an ulnar fracture, and lacerations across his face, knees, and elbows, as well as a chipped tooth. He received eight staples in his head.

A campaign for a counterprotester named Allie has raised more than $26,000 for her fractured pelvis she sustained in the car accident caused by Fields. According to her page run by her mother-in-law, Allie had ran to the assistance of the people plowed over by Fields’ car when he reversed into her.

A campaign for Tay Washington started by her coworker has raised more than $12,000. Washington and her sister Micah were in Micah’s car and rear-ended by Fields in the accident, causing them to rear end a van in front of them. As a result, Tay has sustained a broken ankle, but her campaign is raising funds for car-related payments that aren’t being covered by her and Fields’ insurance, as well as mental and emotional distress. The sisters are also suing more than two-dozen right-wing and neo-Nazi groups for $3 million.

More than $3,700 has been raised for the family who was driving the van the sisters collided into at the time of the accident—the godmother had stepped outside of the van and was subsequently hit when Fields rammed into the crowd.

More than $30,000 has been raised for Congregation Beth Israel, a synagogue that white supremacists terrorized last weekend, standing guard outside with rifles and Nazi flags. Funds will go toward increased security and to fund the synagogue’s social justice and social action functions.

One other campaign has raised more than $140,000 for general Charlottesville victim relief. Meanwhile, Susan Bro, the mother of Heather Heyer, said on Good Morning America that she’s in the process of setting up a foundation in her daughter’s name.

GoFundMe has followed suit of other tech companies refusing business from white supremacists. Leading up to the Saturday rally, Airbnb canceled reservations they suspected to be made in association with white supremacists. GoDaddy later canceled its business with neo-Nazi site Daily Stormer, and on Thursday OKCupid banned the account of neo-Nazi Christopher Cantwell, who was featured in Vice’s documentary on the weekend’s violence. Facebook and Reddit have also deactivated accounts associated with hate groups in the wake of Charlottesville.

“We’re privileged to see how generous the GoFundMe community is each and every day. When tragedy strikes, they are ready to open their hearts—and their wallets—to people in need,” Solomon told the Post. “Following the horrific attack in Charlottesville, we removed multiple campaigns for James Fields, and we will continue to do so if other campaigns are created. Those campaigns did not raise any money, and they were immediately removed.”