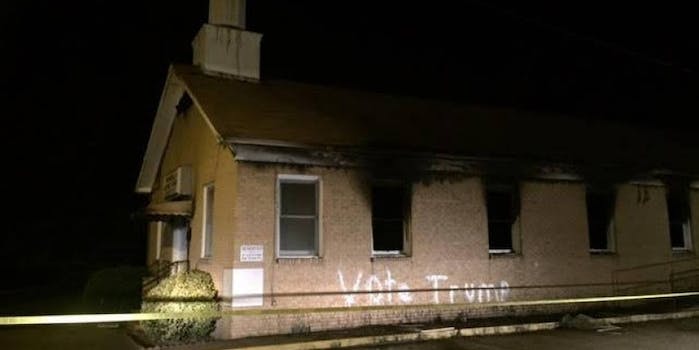 A GoFundMe has been started to help with repairs.

A predominantly black church in Greenville, Mississippi was burned yesterday, and on its facade were the words “Vote Trump” scrawled in graffiti.

The FBI released a statement last night saying it’s looking into whether the vandalism of Hopewell M.B. Church was a civil rights crime.

However, others feel the case is pretty cut and dry. On a GoFundMe page created to assist the church in its repairs, its organizer writes, “The animus of this election cycle combined with the potent racial history of burning black churches as a political symbol makes this event something we must not ignore.”

Crimes with racist motivations invoking Trump’s name have happened quite a bit this election cycle. One writer described how her car was egged and vandalized with “Trump” and “Muslim Go Home.” An elementary school with a large Latino population was tagged with graffiti of “Trump 2016” and “Build the wall higher.”

“Only two weeks ago, the internet came together to help repair a North Carolina GOP field office that had been burned by thugs,” writes GoFundMe starter J. Blair Reeves Jr. “Justice demands we do the same now.”

And many are calling out the vast difference in attention the GOP office burning received versus crimes like this one.

Hopefully people donate to the help the church out like they did the GOP office, even though they won't get to feel that liberal smugness.

Will this get as much press as the GOP office arson? Will Trump supporters raise money for repairs the way dems did?https://t.co/ayCPRJ1Wz0

As of this publishing, the GoFundMe had $2,160 of its $10,000 goal, and the organizers were still trying to contact church leaders.