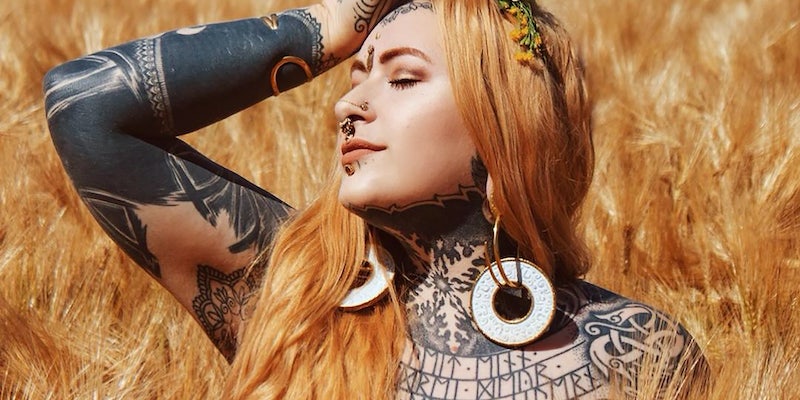 ‘This is extremely humiliating’: Instagram influencer says movie creators stole her chest tattoo design, associated it with ‘satanism and murder’

The director of 'God Is a Bullet' acknowledged the similarity.

An upcoming film is facing scrutiny after an Instagrammer accused the creators of stealing from her tattoo design for a character.

Anka Miau shared side-by-side comparisons of her tattoo and one featured on an actress in God Is a Bullet, an upcoming film by writer/director Nick Cassavetes. It stars Game of Thrones’ Nikolaj Coster-Waldau, who originally posted the set picture that alerted Miau to the similarities.

The Instagrammer alleged that the crew of the film “decided to steal my chest tattoo and put it on a character that is involved with a satanic cult murdering and kidnapping.”

“The tattoo is so extremely visible on me and thus a part of my visual identity finally putting me in context with satanism and murder,” she wrote. “This is extremely humiliating.”

The pictures show that while the tattoos are not identical, they share similar features, from the overall design to the details of what appear to be Norse runes in the center. The only major difference seems to be that the actress has a spider and skull design on her neck where Miau’s tattoo creeps up her neck to encompass a snowflake instead.

After Miau went public with her accusations, people took notice of the similarities between another tattoo given to the same character and that of musician Zheani.

Tattoo copyright can get tricky when it comes to actors’ actual tattoos being visible in commercial productions, but in general, the artist who created a certain design owns the rights to it.

In 2011, tattoo artist S. Victor Whitmill sued Warner Bros over its decision to replicate Mike Tyson’s infamous face tattoo—which Whitmill created—on Ed Helms’ character in The Hangover Part II as a gag. The case was ultimately settled out of court.

While it is unclear what legal ramifications there may be in this particular scenario, Cassavetes has allegedly already reached out to the two women to discuss the matter after being made aware of the similarities.

“I’m so sorry, and I will try to make this right,” reads the screenshot of a message Cassavetes allegedly sent Zheani.

He explained that he was shown reference photos for the “many tattoos” that needed to be created for the movie and told the makeup department which ones he responded to.

“They are then supposed to be reconceived and re-drawn (obviously that didn’t happen),” the message reads. “I’m not trying to excuse it, only [to] tell you that it was unintentional. I would be upset, too. But I would like to make it right if I can.”

Miau acknowledged Cassavetes’ reaching out on her original post and thanked her followers for the support while also requesting that nobody harass the cast and crew as they try to work things out.

The Daily Dot has reached out to Miau for comment.