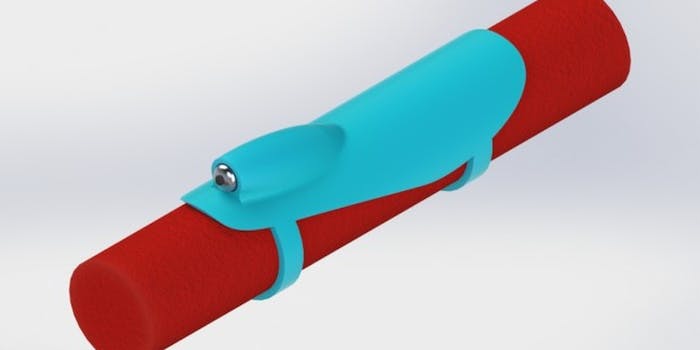 Some genius made the world’s first pool float sex toy

“I had trouble becoming sexually aroused,” Sue, the former boss of a pay phone company, told the Daily Dot over the phone. “It had nothing to do with my partners, they were all very wonderful. I knew I was the one with the problem.”

That comment planted the seed of an idea that grew into a waterproof sex toy called Gnarly Rider. Here’s what her creation looks like: Do we need to explain how you use it? Probably not.

Although the Gnarly Rider sounds like a gimmick—and it definitely is—Sue claims there’s scientific research connecting the benefits of floating in water to stronger orgasms. The Gnarly Ride’s website is fairly vague about what this actually means, but it contains a long-winded description—in Comic Sans MS, no less—arguing that your brain produces similar endorphins when you float in water that it does when you have an orgasm.

There’s actually some support for this theory in the form of flotation therapy, a form of therapy that involves immersing oneself in a tub of warm salt water. Flotation therapy is said to release endorphins in the brain, which reduce pain and induce feelings of peace and relaxation. The same chemicals are also released in your brain when you have an orgasm.

In order to bring this floating stimulatory device to the masses, Sue seeks to raise $100,000 on IndieGogo. You can pre-order your own gadget for $50 or $60, depending on what color you want, and there are some bonuses for those wanting to contribute more.

So far, the Gnarly Ride has only raised $300, but you can learn plenty more about the device at Sue’s site.