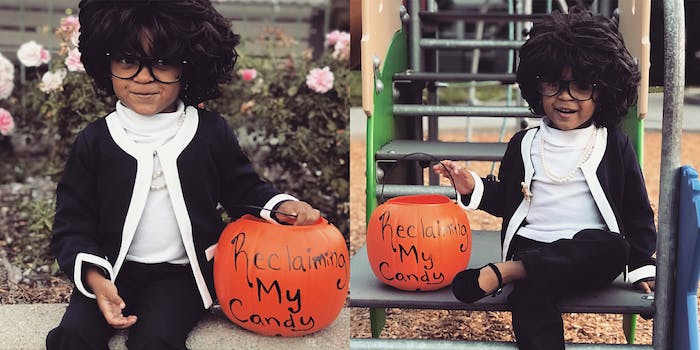 Rep. Maxine Waters (D-Calif.) is beloved by feminists across the U.S., in part because she’s a Black congresswoman in a white-male-dominated political world who isn’t afraid to call out politicians’ nonsense. Like when Treasury Secretary Steven Mnuchin delayed answering a question during a committee meeting about President Trump’s association with Russian banks, and Waters declared that she was “reclaiming my time” from him.

So to celebrate Waters’ feminist spirit, Black girls around the country decided to pay homage to the congresswoman for Halloween.

Over on Instagram, one woman’s post went viral after she shared photos of her niece dressed up as Waters for the day. Featuring oversized glasses, formal business attire, and a trick-or-treat pumpkin that reads “Reclaiming My Candy,” the photos were too adorable to miss. Waters’ miniature double quickly trended across Twitter, with Black women praising the girl and her for family being simultaneously on-point and hilarious.

HoldThePress: This little won Halloween!!!She went as Congresswoman Maxine Waters. And she is reclaiming her candy 🍭🍬! #BlackGirlMagic pic.twitter.com/7yS7DduP2U

My Child: Mama I wanna be a minion.

Me: You gonna be Maxine Waters. pic.twitter.com/zaT4VlkYOq

Another young girl went viral with a similar outfit, instead holding a “Reclaiming my time” sign. The internet equally agreed that she deserved plenty of candy.

Others pointed out that the Maxine Waters outfits are a breath of fresh air during a day when racist costumes plague the news cycle and Trump’s latest faux pas reminds the world that a man who, at best, isn’t kind or aware is still president. Sometimes, nice things happen in America. Sometimes, young Black women get to reclaim their time and candy.

This is the most delightful thing I've seen today #ReclaimingMyCandy

This gave me a genuine laugh on a grim day in NYC. Thank you.

I hope @RepMaxineWaters loves this as much as I do

Whoever this child belongs too. She is just precious.