She has been wearing shirts and pants to school for years.

Student Aniya Wolf was kept out of her high school prom because she was breaking “dress code.” She was wearing a suit.

According to ABC 27, Wolf arrived to the dance at Bishop McDevitt on Friday only to be kicked out. Apparently, they were enforcing a dress code that “specified girls must wear formal dresses.” Wolf wrote on Facebook that the principal even threatened to call the cops.

Wolf, who identifies as lesbian, has dressed less traditionally feminine ever since she was little. Throughout her past three years at Bishop McDevitt, her uniform has been a shirt and pants.

After Wolf had already purchased a suit, there was reportedly a last-minute email stating that girls had to wear dresses to the prom. Wolf’s mother, Carolyn, called the school to complain. Like most teenagers, Aniya wasn’t deterred by the notice. She was excited for the dance and decided to go anyway.

She told ABC 27, “I think my experience shouldn’t be any different than anyone else’s because of something I was born with.”

The school posted a statement to their Facebook page on Saturday night.

“Bishop McDevitt will continue to practice acceptance and love for all of our students,” even though the school apparently couldn’t allow a girl to enter the dance in a version of the clothes she had been wearing to school daily.

Many have taken to the comments to show their support for Aniya, including fellow McDevitt students. 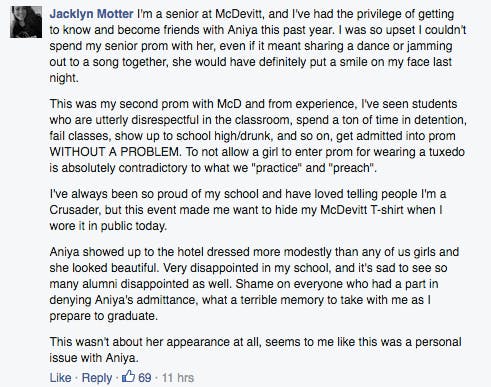 This isn’t the first time a high school student has been barred from a dance for reasons similar to Aniya’s experience. Hopefully this trend does not continue next prom season.