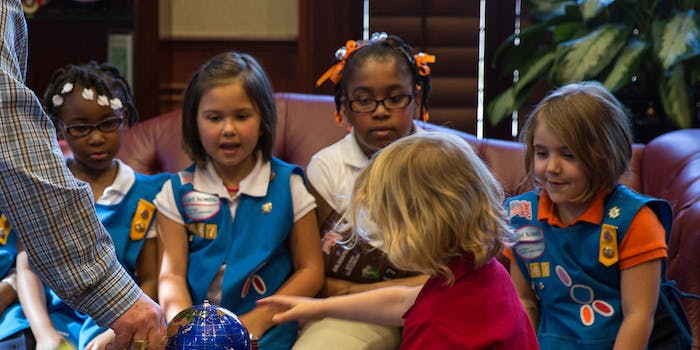 A whopping $100,000 donation was recently received by the Girl Scouts of Western Washington, with this damning message attached: “Please guarantee that our gift will not be used to support transgender girls. If you can’t, please return the money.”

This put the leaders of the youth organization for young girls in a precarious position: That amount of money would send 500 girls to Girl Scout camp, but it would also fundamentally go against the group’s goals.

“Girl Scouts is for every girl, and every girl should have the opportunity to be a Girl Scout if she wants to,” Megan Ferland, CEO of the regional Girl Scouts council, wrote in a letter to the donor whose identity is being kept private, according to Seattle Met.

The organization ultimately decided to return the sum, and the donor’s request left a bad taste in its mouth. So it launched an IndieGogo crowdfunding campaign to see how much money it could raise under the emphasis that Girl Scouts is indeed for every girl. The page’s one-sentence tagline puts it simply and clearly: “Help us raise back the $100,000 a donor asked us to return because we welcome transgender girls.”

After being active for just one day, the campaign has surpassed its goal and raised more than $190,000 for trans Girl Scouts.

People are showing their support on social media with the #ForEVERYGirl hashtag.

so proud to be a former girl scout right now. discrimination has no place #ForEVERYGirl

By the end of the day, @GirlScoutsWW will have more than doubled the donation they returned. A pretty clear win for inclusion! #ForEVERYGirl

Ferland explained that the organization’s relationship with the unnamed donor is “complex,” but it has a track record to uphold: Girl Scouts has now publicly supported transgender women twice within five years, previously allowing a 7-year-old boy to join the organization in 2011 because he identified as a girl.

Transgender advocacy groups, like the Gender Justice League in Seattle, are thrilled about how the Girl Scouts of Western Washington handled the tricky situation.

“We’re so profoundly grateful that Girl Scouts of Western Washington are standing by their values to support all girls,” Gender Justice League Executive Director Danni Askini told Seattle Met. “It’s also mortifying that the donor withdrew this funding. It’s a clear example of how much bias and prejudice against transgender people still exists in our society.”